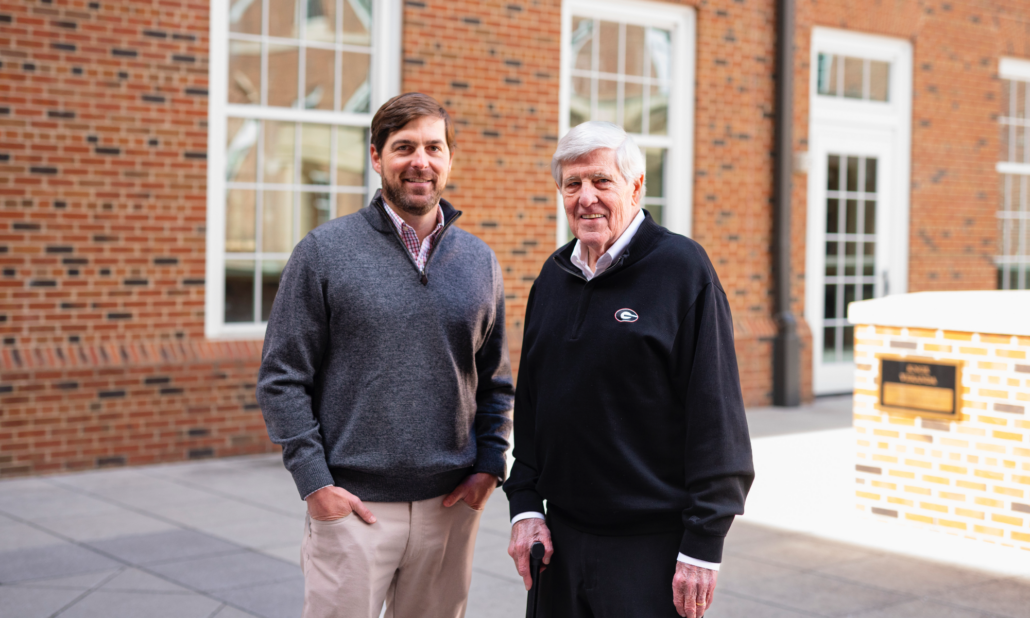 The Rooker Family history is deeply embedded in Athens and the University of Georgia. In 1907, A. P. Winston, the grandfather of Jack Rooker (BBA ‘60), came to UGA from the University of Virginia to manage the new agricultural college on campus. It was there that he met his wife, Jewel Kinnebrew, who lived in the area. Jack’s mother, Mary Winston Rooker, was born in a house on campus, off College Station Road. She was raised in Athens, met her future husband, William A. Rooker Sr., and they both graduated from the university in 1933. Over the next three generations, the Rooker family would boast a total of ten family members graduating from UGA.

Cindy and Jack Rooker have spent decades leaving their mark on the University of Georgia. Jack Rooker started serving on the UGA Foundation Board of Trustees in 1996. He also served as the founding chairman of the UGA Real Estate Foundation. In 2005, the John W. Rooker Hall and Cindy Rooker Fireside Lounge opened on the university’s East Campus Village in gratitude for their years of alumni leadership and support. In 2014, the Rooker Family Need-Based Scholarship Fund was established.

The Rooker family’s impact on UGA is boundless. One of their most recent commitments was the opening of Rooker Family Equine Receiving Barn, at the UGA Veterinary Medical Learning Center in 2015. This project was especially close to their hearts as Cindy and Jack Rooker bred and sold quarter horses and thoroughbreds for many years and utilized the UGA Veterinary Hospital. In 2017, Moore-Rooker Hall opened in the Terry College of Business Learning Community thanks to significant financial support from the Rooker family and their longtime friend, Dudley Moore (BBA ’57).

After graduation, Jack Rooker joined Southern Bonded Warehouse, the third-party distributor his father began in Atlanta. He later built a multiple warehouse campus in Morrow, Georgia. Hot summers were spent in the warehouse on a forklift, loading trucks. No desk job for him; he learned from the bottom up. He became chairman and CEO in 1975 and sold the company in 2005.

Jack Rooker started his own company in 1965, John W. Rooker and Associates, a development, design, and construction company. With great paternal pride the company has grown and expanded in the past 10 years under son John Rooker, who is the CEO of Rooker Co. In the beginning, John Rooker invested in a down and out enclosed shopping mall in Union City, Georgia, and transformed it into a thriving movie studio complex called Atlanta Metro Studios. He enjoys investing in land, and walking it to see the buildings as they spring up. His son, John, is following in his footsteps.

Beyond their extensive commitment to UGA, the Rooker Family is involved in other non-profit organizations including First Presbyterian Church of Atlanta, The Westminster School, Forward Arts Foundation, Shepherd Center Foundation, Piedmont Hospital Foundation and Emory Hospital.

Jack has five children, 13 grandchildren and one great-grandchild. Family is especially important, and for over 20 years, Cindy and Jack Rooker have taken all 25 family members on an annual family vacation. Jack Rooker is the quintessential southern gentleman. Honorable, loyal to family and friends, and a man of his word.

“It’s inspiring to see such passion for anything, but especially a university. Being able to witness it firsthand [in my father, Jack], while also seeing the growth and maturity that the school is taken on over the years, it makes you feel like you’re a part of something special. Something that is bigger than yourself. .”
– John Rooker (BBA ’02), CEO of Rooker Co.