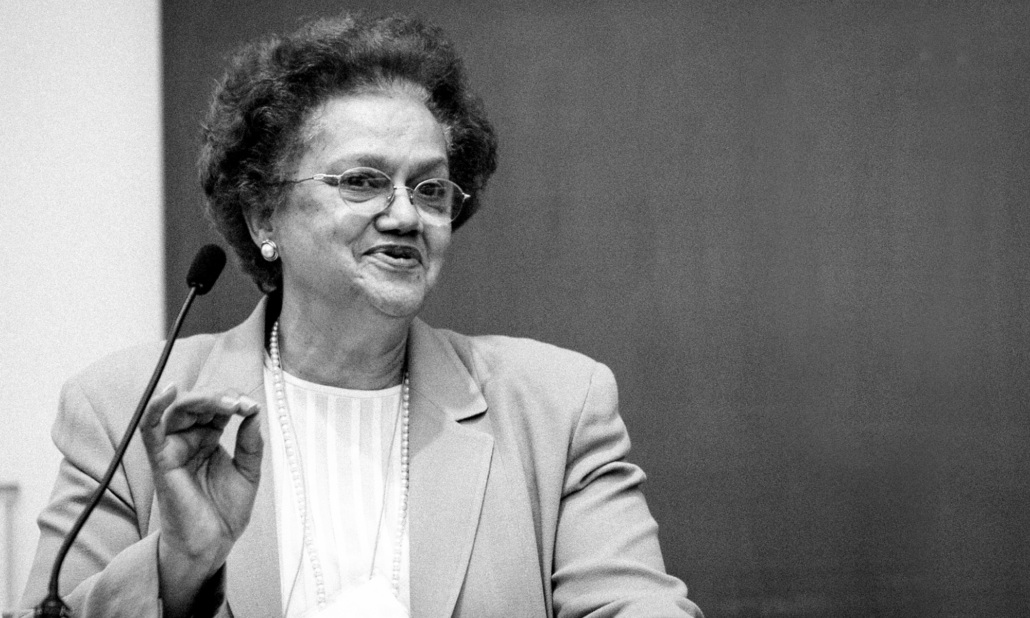 Shirley Mathis McBay is the University of Georgia’s first Black doctoral graduate and the first woman to earn a doctoral degree in mathematics from the university. McBay graduated five years after the university was desegregated in 1961.

She graduated Hutto High School in Bainbridge, Georgia, at 15. Four years later, she graduated Paine College in Augusta, Georgia with a degree in chemistry. She started teaching at Spelman College after graduating. During this time, she also pursued master’s degrees in chemistry and math at Atlanta University, where she met her future husband, Henry McBay.

A renowned chemist and educator in his own right, Henry McBay taught chemistry at Morehouse College. Shirley Mathis took one of his courses and found her interest in the subject had grown even more.

But the subject wasn’t the most practical for her new life. She and McBay had married, and she had a baby and realized chemistry meant hours spent in the lab—hours she’d rather spend with her family. So she switched over to her other love, mathematics.

She began working toward her doctorate at the University of Chicago but decided to make the switch to attend the University of Georgia in 1964. By the time she set foot on campus, UGA was technically integrated, having accepted Charlayne Hunter-Gault (ABJ ’63), Hamilton Holmes (BS ’63) and Mary Frances Early (MMED ’62, EDS ’67) three years earlier. But that didn’t mean everyone accepted the presence of Black students on campus.

McBay had a largely peaceful time in Athens living off-campus during the week and commuting back to Atlanta on the weekends to spend time with her husband and two sons, Ron and Michael.

McBay went on to be a leading voice for diversity in science and math education. In 1980, she was named dean of student affairs at MIT, where she was once again the first Black person and the first woman ever appointed to this position. She was also chair of the National Science Foundation’s Committee on Equal Opportunity in Science and Engineering.

In 1987, she launched a study to understand why Black students were not better represented in science and engineering. Her research concluded that the educational pipeline was broken and that improving enrollment among Black students required a wholesale rethinking of education from kindergarten through 12th grade. After three years working on the study at MIT, she founded the Quality Education for Minorities Network, a nonprofit that would leverage the study’s findings to improve educational outcomes for minority students in the U.S.

She left her position at MIT to run a spinoff from the study, dedicating the rest of her career to improving the educational structure in the country to support minority students in the sciences. It became her personal mission to foster success in dedicated and focused minority students. She pushed students academically and professionally.

The Science Library at the University of Georgia was named for McBay in December 2021 in honor of her legacy as a passionate leader in STEM who was committed to fostering access for all.

McBay passed away in November 2021, at the age of 86. Her award will be accepted posthumously by her sons, Ron and Michael McBay.

“In the search for knowledge in science and engineering, the worst intellectual crime one can commit is to prejudice one’s results, to prejudge how something will turn out. However, this is precisely what we are doing when we fail—from elementary school to graduate school—to encourage women and minorities to enter the fields of science and engineering.”
– Shirley McBay speaking to Congress in 1987.

“Shirley McBay made a career-long commitment to the idea that if we have greater inclusion in STEM disciplines of women in minorities, it’s good for science and good for society.”
– Toby Graham, University Librarian and Associate Provost, University of Georgia