As the birthplace of higher education in America, UGA is guided by a respect for history and tradition while keeping a firm eye on the future. We’re taking a trip down nostalgia lane this fall to learn about college life through the decades. So put on your acid wash jeans and roll up those blazer sleeves … it’s time to head back to the 1980s.

The 1980s were defined by pop culture, consumerism and the end of the Cold War. It was a spirited decade in America and that was no different on the UGA campus. Long-standing traditions found their humble beginnings during these years. Our historic campus also expanded with newly established buildings and organizations.

Students in the 1980s were hopeful and enthusiastic about the opportunity to improve the future. They embodied the spirit of UGA, striving to create better communities around the world and empower the next breed of Bulldogs to continue that tradition. Among UGA’s distinguished alumni from this decade, there are professional athletes, writers, educators, business leaders and government officials. Bulldogs from the ’80s demonstrate the incredible value of a degree from UGA.

Here are a few key moments from UGA’s history in the 1980s: 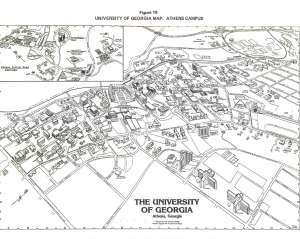 UGA’s campus in 1986. Notice any differences from today?

With a growing and more diversified music industry, Athens saw new bands and venues emerge in the 1980s. The 40 Watt Club moved to a larger space, and the landmark Georgia Theatre was reopened as a music venue in 1989.

The Athens music scene spread to houses around Baker Street and in clubs such as the Georgia Bar and Tyrone’s OC. College students danced to local bands like the Side Effects, the Tone Tones, the Method Actors, Pylon, Love Tractor, and the Brains. The B-52’s and R.E.M. paved the way in pop culture, becoming the first internationally renowned bands from Athens after launching a string of hits in the early ’80s.

The 1980s saw the emergence of hip hop and electronic dance music. Artists like Madonna, Cyndi Lauper, Michael Jackson, and Def Leppard revolutionized the music scene with their eccentric looks and cutting edge performances. Reminisce on the ’80s with this UGA Alumni throwback playlist!

The 1980s boasted bold styles, colors and silhouettes. Eclectic fashion was all the rage, with trends ranging from permed hair and ripped jeans to shoulder pads and oversized blazers.

Whether you’ve been Calling the Dawgs since the 1980s or just learned the words to “Glory, Glory,” we remain united by the Arch and the Hedges. We are Georgia Bulldogs, and we Never Bark Alone.

Stay tuned as we continue on this trip down nostalgia lane. Next stop: the 1990s!