Take a trip down nostalgia lane with our newest blog series documenting UGA in the 1970s, 1980s and 1990s. First stop: the psychedelic seventies! We sat down with alumni to learn about college life in a decade defined by war, protests and rock ‘n’ roll.

The 1970s was a spirited decade in America and that was no different on campus. Long-standing traditions, like chanting “How ‘Bout Them Dawgs,” found their humble beginnings during these years. Prominent buildings and organizations also were established, fostering a university-wide commitment to preparing a generation of risk-takers and culture-shapers.

Students in the 1970s were curious and innovative, tenaciously searching for better answers and impactful solutions. Among UGA’s distinguished alumni from this decade, there are scientists, musicians, entrepreneurs, professors and U.S. representatives. Bulldogs from the 1970s continue to inspire those who will lead, discover and serve across our state, country and the world.

Here are some important moments from UGA’s history in the 1970s: 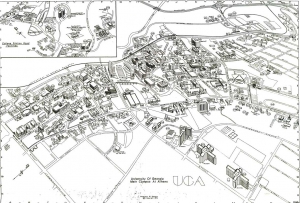 UGA’s campus in 1979. Notice any differences from today?

Athens-based bands revolutionized rock and alternative music in the 1970s. Ravenstone, a politically active hard-rock band, formed at UGA early in the decade. The group supported anti-war protests and other social issues. In 1972, Ravenstone played at the first openly held LGBTQ rights dance in the Southeast. The B-52s played its first gig at an Athens house party in 1977, later releasing several best-selling records.

The Lamar Dodd School of Art sustained the Athens music scene. Throughout the 1970s, it attracted highly qualified and talented students who were seeking a receptive environment for visual arts. These students would become nationally recognized artists, musicians and scholars. In 1979, four students formed R.E.M. and made their debut appearance on WUOG, the campus radio station. R.E.M.’s creative ascent would help shape the Classic City into the cultural epicenter that it is today.

The 1970s gave rise to disco, rock, R&B and soul. Toward the end of the decade, hip-hop was born. Reminisce on the 1970s with this UGA Alumni playlist, a brief sampling of the bands and performers who ruled the golden era of music!

In addition to trailblazing fashion and music, students established their own slang, too. Learn to speak like a Bulldog from the 1970s–or if you were a student during this decade, does anything sound familiar?

Whether you graduated in the 1970s or just started wearing red and black, UGA remains more than a memory and more than a degree. It’s a deep-rooted community, centuries old and over 340,000 strong.