At the University of Georgia, learning doesn’t end when the diploma arrives in the mail. We are a community of lifelong learners, committed to continued growth and to inquiring into the nature of things. We’re spirited and passionate between the hedges, and between the pages, we’re curious, open-minded, and ready to explore new worlds and voices.

Between the Pages is a virtual book club series for the Bulldog community. Perfect for lifelong learners around the world, this book club is an opportunity to enjoy and discuss works by alumni authors with fellow Bulldogs. There’s no cost to participate and optional discussions will take place on the social reading platform Goodreads, culminating in an exclusive virtual gathering with the author. The virtual meeting details will be emailed to registrants the morning of each event.

Hope you’ll secure your book today and join us in discovering what lies between the pages of these alumni-authored books.

Join in the Reading!

What books will be chosen for Between the Pages?

Is there a cost to participate?

How do I obtain a copy of the book?

Can my children participate?

What if I cannot attend the virtual event with the author?

What will the virtual event with the author be like?

Who will moderate discussions during the virtual event?

What is Goodreads and how will it be used?

I am an alumni author; can my book be featured?

This story was written by Sara Freeland and was originally posted to UGA Today on July 7, 2019.

Fifty years ago, on July 20, 1969, Apollo 11 astronauts Neil Armstrong and Edwin “Buzz” Aldrin landed on the moon–the first time humans set foot on another celestial body. As the nation and the world celebrate the 50th anniversary of the first moon landing, the University of Georgia is taking an in-depth look at this historic milestone and the future of space exploration.

Fifty years ago, people around the world stopped what they were doing to watch Apollo 11 land on the moon.

Today, most of the world’s population wasn’t even born when the moon landing took place.

But the significance of this historic milestone still resonates.

“It is fascinating that people feel such a connection to the moon landing and it still inspires curiosity,” said Sarah Anderson, a University of Georgia graduate student in history. “Everyone has a story about their viewing experience.”

Anderson curated “Moon Rocks!,” an exhibition hosted by UGA’s Richard B. Russell Library for Political Research and Studies to mark the 50th anniversary of Apollo 11. Anderson previously worked for two years at the Smithsonian’s National Air and Space Museum in Washington, D.C.

“Space inspires a sense of adventure and excitement. Astronauts were portrayed as All-American, hard-working, accessible heroes—a person that children could aspire to be. Astronauts provided hope of advancement and achievement for average Americans,” Anderson noted. “The exhibit explores this a little more, as well.”

Ultimately, what she hopes to accomplish with the exhibition is to bring generations together—those who witnessed the moon landing and have their own story of watching it on the television while holding rabbit ears with those who were born afterward and grew up with astronauts live-streaming space station experiments.

On display in the galleries in the Richard B. Russell Special Collections Library through December, the exhibition features magazines, political cartoons, satellite models and photos taken from space of the Earth and the lunar landing. The display also includes a piece of the Apollo 9 spacecraft and a medallion that went to the moon and back. 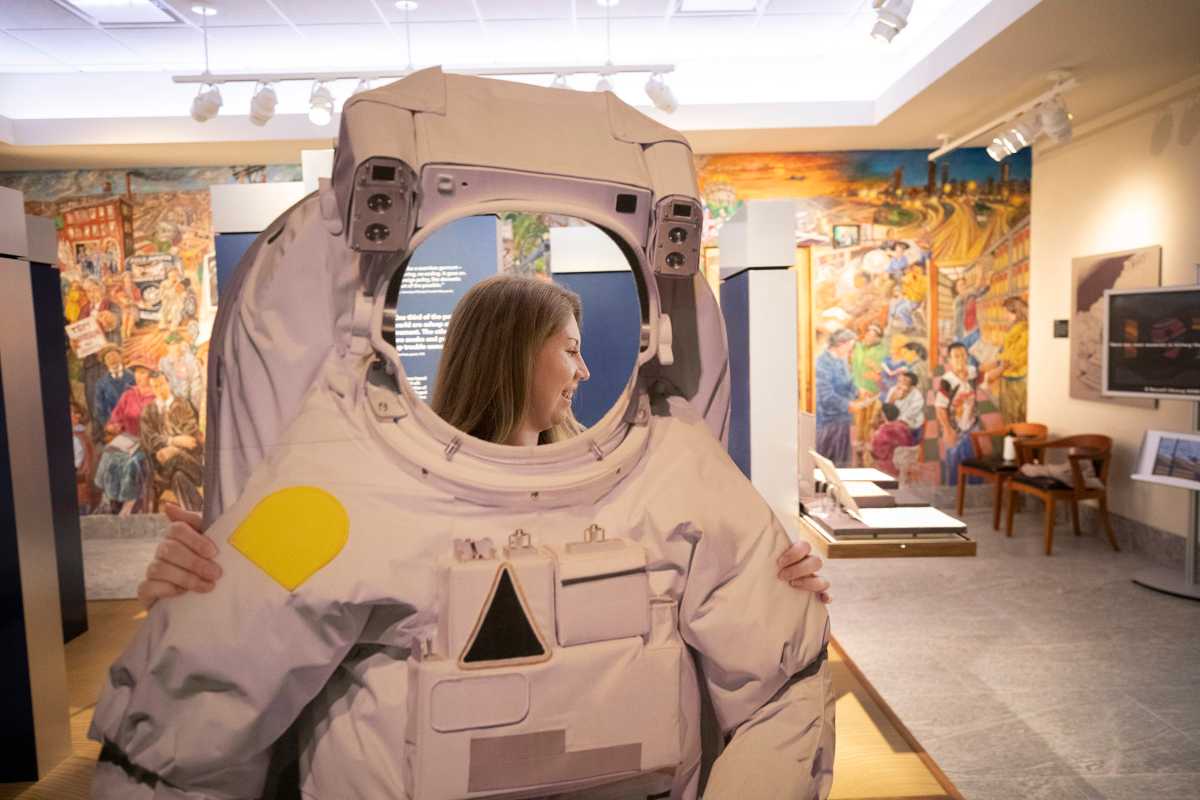 The “Moon Rocks!” exhibition is on display at the Richard B. Russell Building Special Collections Libraries through December. (Photo by Peter Frey/UGA)

On July 16, 50 years after the Apollo 11 launch from Cape Canaveral (formerly known as Cape Kennedy), the libraries will host an event with moon rocks on loan from the Georgia Capitol Collection for one day only. The rocks, along with a state of Georgia flag that went to the moon and back, were given to Georgia by former President Richard Nixon, who gave every state moon rocks and small fragments from the Apollo 11 and Apollo 17 lunar missions after the landing.

The event will also show archival footage of the July 20, 1969, moon landing and have space-themed snacks, including astronaut ice cream and Tang.

To create the exhibition, Anderson found artifacts related to space travel in two collections: the Richard B. Russell Jr. Collection and the Herman E. Talmadge Collection.

Russell, namesake of the libraries building, was on the Senate Committee on Aeronautical and Space Sciences from its conception in 1958 until his death in 1971. The collections include gifts to Russell, magazines he collected, photographs, political cartoons, and letters between Sen. Talmadge and NASA. The exhibition also includes satellite and spacecraft models that Russell displayed in his office. Talmadge was the main advocate in bringing moon rocks collected on the Apollo 16 mission from the Lunar Stone Mountain to Stone Mountain in Georgia. 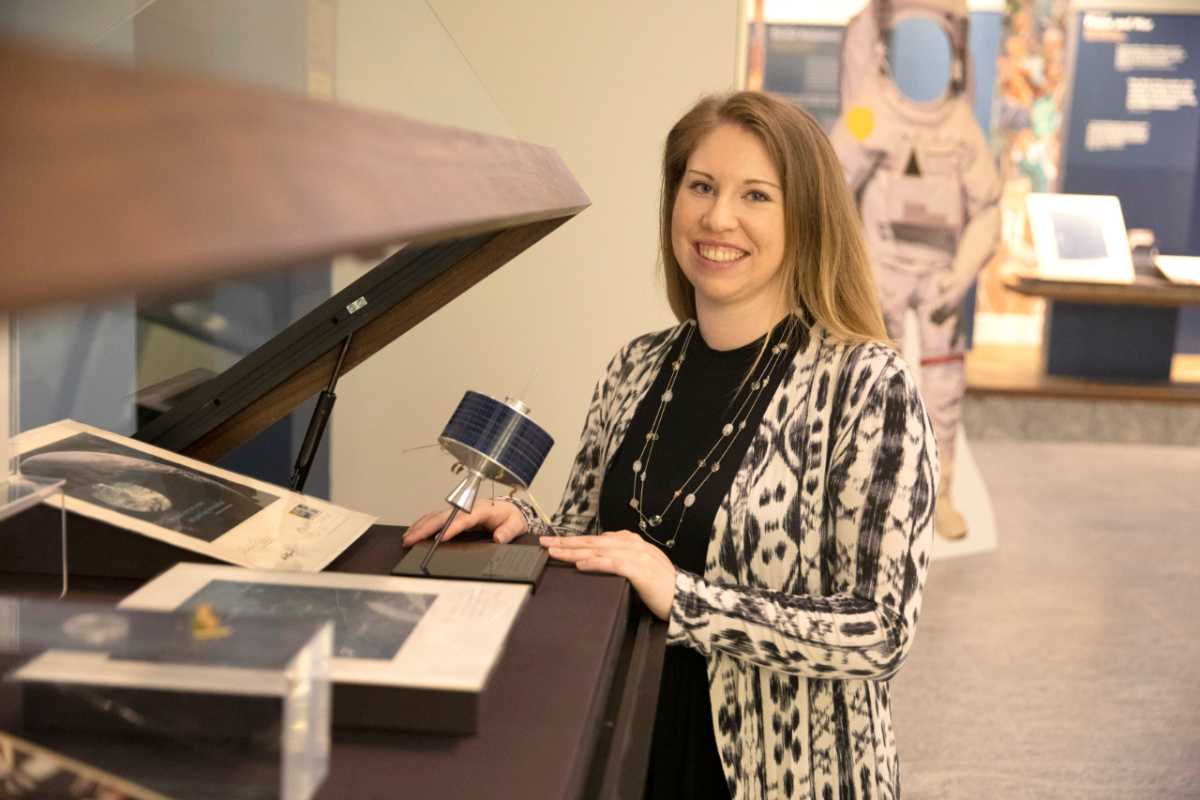 The Moon Rocks! exhibition features magazines, political cartoons, satellite models and photos taken from space of the Earth and the lunar landing. The exhibition was curated by Sarah Anderson, a UGA graduate student. (Photo by Peter Frey/UGA)

To celebrate the 50th anniversary of the moon landing, the Access and Outreach Unit of the Russell Library wanted an exhibition related to the historic event. Anderson, who was interning there, had experience handling spacecraft artifacts from her work at the Air and Space Museum.

A graduate student in the museum studies certificate program, Anderson graduated from UGA with a bachelor’s degree in history in 2013 and then worked at both the Smithsonian’s National Air and Space Museum and Cape Henlopen State Park in Delaware.

A history buff, she initially took the National Air and Space Museum job to learn about World War II and Air Force history. Family history was part of the inspiration—her grandfather served as a radio operator on a B-17 in the U.S. Air Force during World War II.

At the Air and Space Museum, she worked command module hatches that went into space as well as spacecraft models. She worked with the parachutes deployed for landings after the Apollo command modules reentered Earth’s atmosphere and slowed the modules down to lessen the impact of the water landing. Working with these objects made her want to learn more about the history behind the space race and space travel.

Along with other staff at the Air and Space Museum, she began watching Space-X launches on NASA TV and watch NASA send cargo to the International Space Station.

“Seeing these objects that went into space gives you this connection to history that you wouldn’t have otherwise. It makes history more tangible and relatable. It makes you want to learn more about them,” she said. “I had the opportunity to see a multitude of objects that had traveled to an area that I will never be able to explore. I get to see and touch artifacts that have been on true adventures and have inspired awe through generations.”

Her internship at the Paul E. Garber Facility turned into a job and she also served as lead contractor for the medium artifact team. She learned about archival photography, the care of artifacts and how to maintain the integrity of pieces “so that they can be observed and analyzed for generations,” she said. “We would work with pieces that hadn’t been looked at in a while, and providing a stable housing environment for these artifacts is crucial.”

Her team created custom long-term storage structures for the parachutes, which are 25 meters wide. They also worked on ensuring care of artifacts not on display in the warehouses. Her team was in charge of medium artifacts, which means artifacts between 50 and 5,000 pounds. “I drove a forklift every day, which was a unique skill to learn, one that you don’t expect when you decide to work in museums,” Anderson said. “Collections work is delicate and detailed but moving large objects requires heavy machinery.”

The Peggy Heard Galis History Ph.D. Apprenticeship will allow history Ph.D. candidates to gain insight into and experience in the scholarly publishing process.

The University of Georgia Press created an endowment to fund a publishing apprenticeship program for students from UGA’s graduate history program. The Peggy Heard Galis History Ph.D. Apprenticeship will allow history Ph.D. candidates to gain insight into and experience in the scholarly publishing process.

A giving campaign organized by the UGA Press funded the endowment. UGA Press Advisory Council member Charley Tarver made the lead gift and served as the fundraising chairperson, while Lucy Allen served as the fundraising co-chair and helped connect local and out-of-state contributors with the endowment. Because of Tarver and Allen’s efforts, the campaign received nationwide donations now totaling over $100,000.

The endowment honors Galis for her many years of service to the press, the history department, and UGA. A resident of Athens, Galis and her husband Denny Galis are both graduates of UGA. She is a founding member and current vice chair of the UGA Press Advisory Council. She has long been actively involved in community, cultural and educational organizations, including the Clarke County School District, the Georgia Museum of Art, the Athens Clarke Heritage Foundation, the Southern Historical Association and the Southern Foodways Alliance.

“Peggy Galis is a human super-connector. We are thrilled to announce this teaching and learning program that honors her intellectual curiosity, her love of history and books, embodied in her deep commitment to UGA students and the UGA Press,” said UGA Press Director Lisa Bayer.

The Peggy Heard Galis apprentices will be Ph.D. students in the UGA history department. The apprentices will receive an in-depth introduction to university-press publishing and participate in the process by which scholarly books are acquired, peer reviewed, developed, edited and approved for publication. In addition, they will learn how to communicate professionally with various parties in the industry, juggle multiple tasks at once and manage a project’s status long-term.

“Peggy Galis is the history graduate program’s secret weapon. She fundraises, hosts and promotes events, and asks astute questions of every speaker who darkens our door. Peggy is a PR department, development office, and Ph.D. dissertation committee rolled into one,” said Cindy Hahamovitch, B. Phinizy Spalding Distinguished Professor of History at UGA. “How perfect is it that an apprenticeship designed to teach history graduate students how publishing works will be named in Peggy’s honor?”

Apprenticeships like these enhance the UGA learning environment, a primary goal of the Commit to Georgia Campaign. With over $1.2 billion raised, the campaign has already transformed UGA by way of new scholarships, learning opportunities, facilities and more. To find out how to help build on the campaign’s success in its final year, visit give.uga.edu.