With attractions like Disneyworld, Universal Studios and SeaWorld, the city of Orlando brings magic and fun to the Sunshine State. But there’s more to “the City Beautiful” than theme parks. Amanda Morris (BSED ’19), president of the UGA Alumni Association Orlando Chapter, shares her top picks for O-Town.

Favorite part about living in Orlando.

“There’s always something to do and something going on. You can check out seasonal festivals at EPCOT, concerts at Universal, a farmers market in Kissimmee, an Orlando Magic game downtown or a brewery in Winter Garden!”

“Orlando is full of new people and new experiences. Everything is constantly evolving, and you can do something different every weekend.” 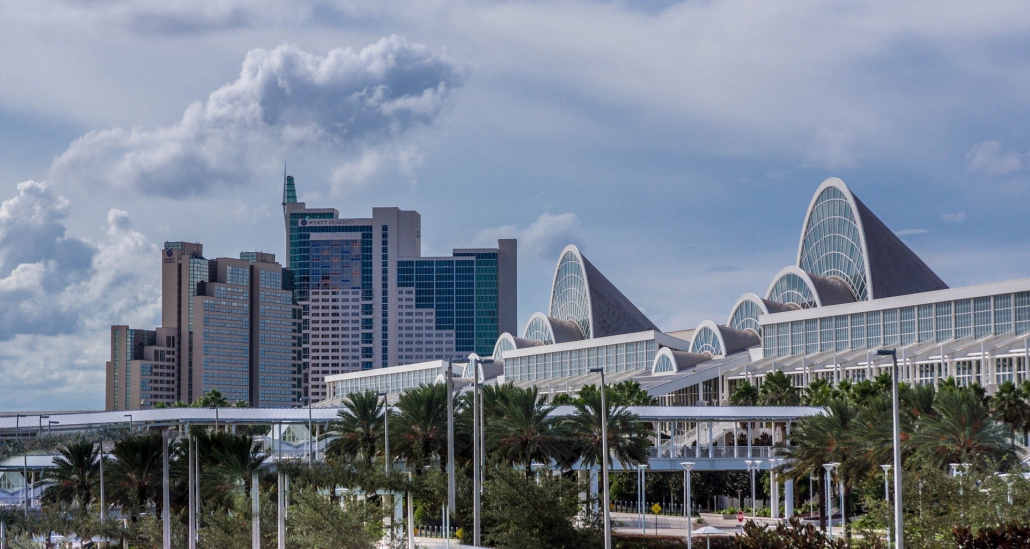 The Orange County Convention Center is located in Orlando.

One thing people may not know about Orlando.

“It’s not just theme parks—Orlando is a huge city. So it’s easy to escape the touristy parts and find something unique nearby. The beaches are close, and there are lots of cool things to do out in nature, like kayak at a spring with manatees.”

Where to grab a bite to eat. 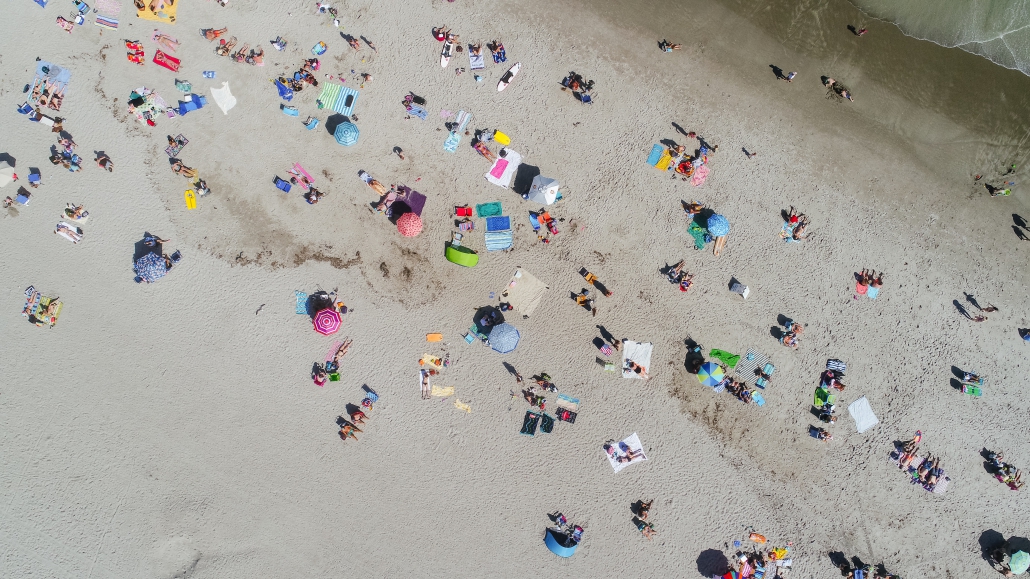 “At Feast on the Fifty, UGA alumni in Orlando get together at Camping World Stadium to serve food and drinks and have a spirit competition! I also love our alumni tailgate with the Jacksonville Chapter for the Georgia-Florida football game.”

Best place in Orlando to watch the Bulldogs play on a Saturday in Athens?

“The Porch in Winter Park has great food and a great game day atmosphere. They’re also dog-friendly outside.” 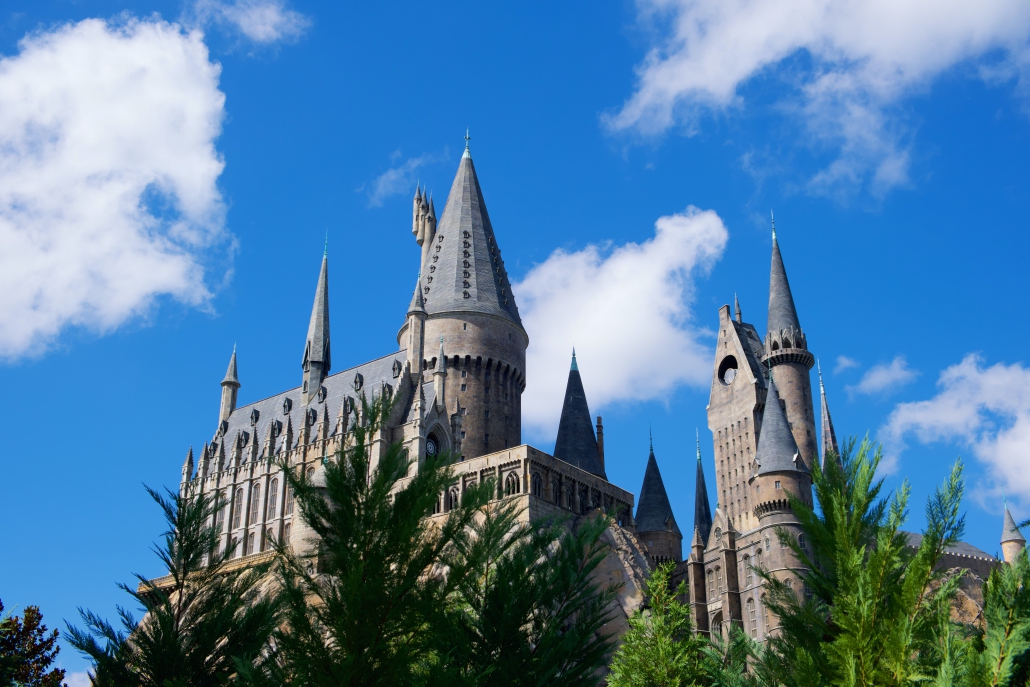 Orlando is home to several amusement parks, including Universal Studios.

Name a well-known UGA graduate who lives in or is from Orlando?

“Orlando is home to Eric Baker (ABJ ’90), creative director of Star War: Galaxy’s Edge, and Pamela Landwirth (AB ’73), CEO and president of Give Kids the World.”

Advice for Bulldogs new to Orlando.

“There’s always something to do in Orlando, and it’s easy to meet new people! Consider joining a Bulldogs After Business Hours happy hour event or a game-watching party to meet new people. Get out and explore all the amazing fun things Orlando has to offer, both in theme parks and not!”

You can commit to the G no matter where you live, but Bulldogs living in Florida may have to work a bit harder to represent the red and black. We asked a few Florida-based Dawgs for tips on how they show their UGA spirit amid a sea of Gator orange.

Whether you’re relaxing on one of Florida’s beaches or waiting in line at Disney World, red and black is a must. You’re sure to spot another Bulldog in the crowd when you do!

Find a fellow Bulldog to watch games with.

When it’s Saturday in Athens and you’re wishing you could be between the hedges, team up with other alumni to cheer on the Bulldogs. UGA alumni chapters make this easy by hosting game-watching parties in several Florida cities.

Order a taste of Athens to your Florida doorstep.

Whether you’re craving a cup of Jittery Joe’s coffee or missing the legendary biscuits from Mama’s Boy, many Athens-based companies will ship your favorite treats to the Sunshine State. 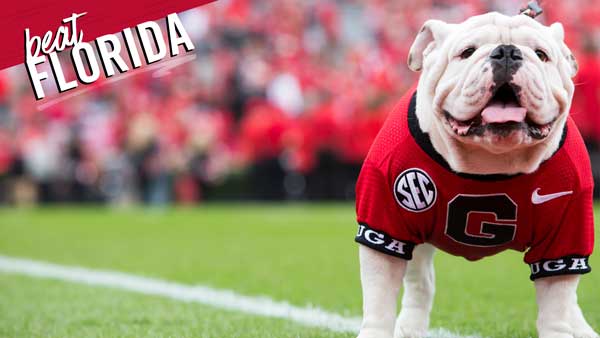 Travel to Jacksonville for the Georgia-Florida football game.

Even if you don’t have tickets to the game, this big game is the perfect opportunity to reunite with Bulldogs you’ve missed. It’s also a chance to show your Florida friends what “committing to the G” is all about.

Dress your dog in a UGA bandana when you go for a walk.

Because nothing says “Go Dawgs” like a dog representing the red and black.

Don’t reminisce about Athens alone—find your Alumni Chapter to connect with other UGA grads for game-watching parties and other networking and community service events. 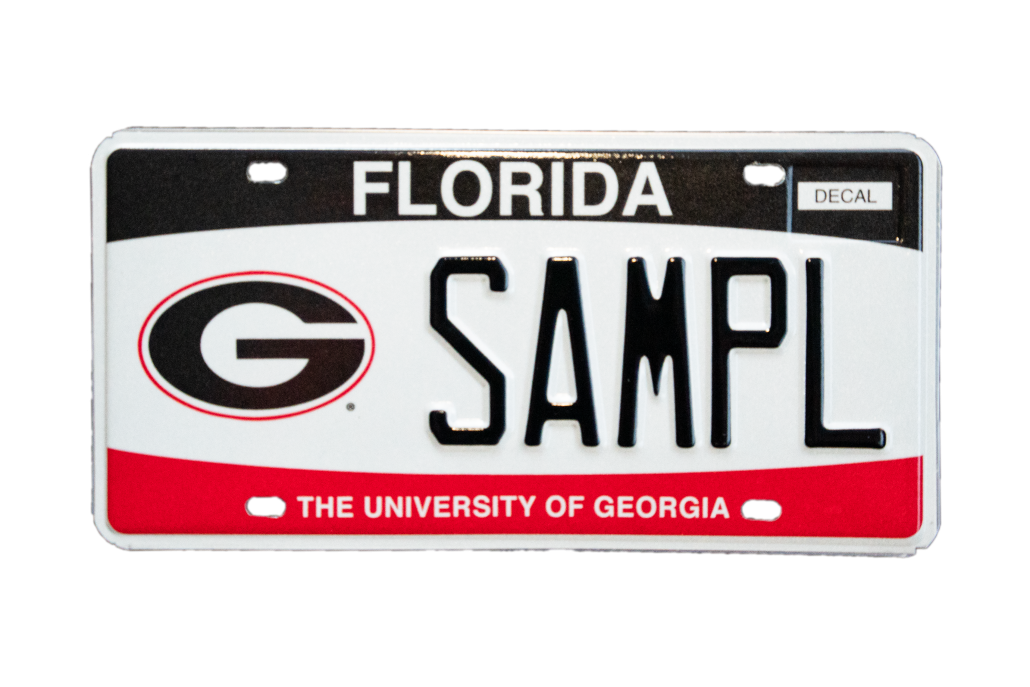 Purchase a voucher for a UGA license plate in Florida.

And finally: never, ever, ever wear orange.

Thank you to Orlando Alumni Chapter President Amanda Morris (BSED ’19), for her help with this post! 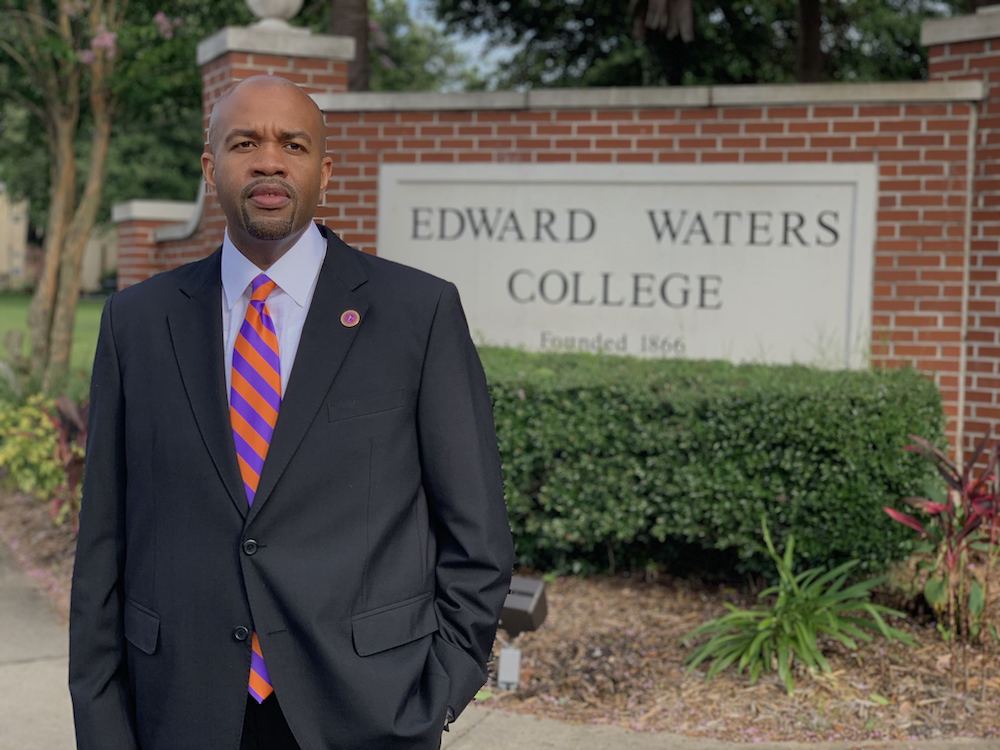 Zachary Faison At A Glance

This summer, Zachary Faison was named one of the UGA Alumni Association’s 40 Under 40 honorees. He was selected for his impressive accomplishments and commitment to his alma mater. A 2006 graduate, Zachary attended law school at the University of Georgia. After graduation, Zachary earned his Certificate of Fundraising Management from Indiana University. In 2015,  he joined a small group of higher education administrators at Harvard’s Institute for Educational Management. “It was a very intensive institute that gave us expanded insight on being leading administrators at colleges and universities around the country,” says Zachary. “It really helped to support my trajectory as an academic administrator and leader in higher education.”

Zachary serves as president and CEO of Florida’s first historically black college or university, making him the youngest HBCU president in America. “It’s inspiring work. Every day I get to see the impact upon the lives of students, particularly students of color.”

While at Edward Waters College, Zachary has established an honors college, a center for undergraduate research and is in the process of launching an online degree program. Looking forward, Zachary wants to see the institution grow, not only in enrollment numbers, but “in the expansion of academic profiles and offerings.” Edward Waters College has plans to offer graduate-level programs and become more engaged in the local Jacksonville community.

About 90% of EWC’s students, while academically successful, are eligible for Pell Grants and struggle to pay tuition. Last year, Zachary established a program to help meet this need. If students have an outstanding balance of up to $3,500, EWC will match the balance. “We wanted to do whatever we possibly could to ensure students wouldn’t get this close to the finish line and not finish.” Because of this new program, a significant number of students are able to return to school and continue earning their degree.

Proud to be a Dawg

When asked about the first time he set foot on UGA’s campus, Zachary recalls a feeling of awe. “My eyes were wide open at how expansive the campus was … how beautiful it was … the amazing history that goes along with it. It was incredible.”

During his time at UGA, Zachary was involved in the law school’s Moot Court, a mock trial team that competes nationally. “For me to have the chance to compete with students that have gone on to do such extraordinary things is something I will always remember and cherish,” says Zachary.

Zachary Faison will be honored during the ninth annual 40 Under 40 Awards Luncheon in Athens on September 13.

Be sure to check out the other impressive 40 Under 40 honorees. 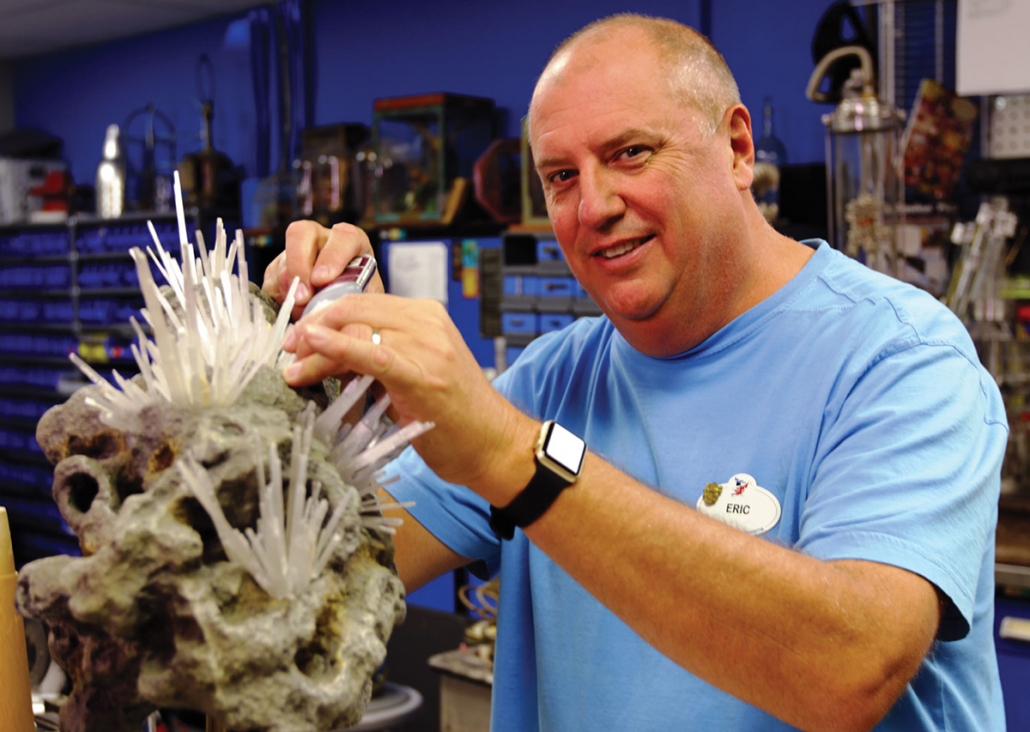 Eric Baker (ABJ ’90) is an Imagineer for The Walt Disney Company, with credits including just-opened Galaxy’s Edge.

*In honor of Galaxy’s Edge officially opening in Disneyland on May 31, UGA is highlighting Eric Baker (ABJ ’90), a Grady graduate and creative director with Walt Disney Imagineering.

This story originally ran in the Summer 2019 issue of Georgia Magazine.

A long time ago in a galaxy not so far, far away …

A young Eric Baker ABJ ’90 was making his own Star Wars playsets because store-bought versions weren’t good enough. The son of an art teacher and a building contractor, Baker made his own Yoda masks from forms he sculpted, molded, and casted with help from his mom.

“I love taking these worlds and bringing them from film to something people can actually go see and touch and really be a part of,” he says.

Baker attended the University of Georgia where he studied telecommunications and theatrical design. He knew he wanted to make films, so he learned model building, special effects, and set design through his course work. As a student, his first job in the industry was at Cable 13 doing Larry Munson’s makeup for his Tuesday night show. 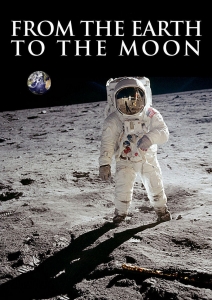 Baker’s work on the Tom Hank’s mini-series “From the Earth to the Moon” earned him an Emmy nomination.

After graduation, Baker found work at Nickelodeon doing props on the hit show Clarissa Explains it All, coming up with games to gross people out for Double Dare, and testing pool games for Nickelodeon Guts.

That led to other film and TV work including The Mickey Mouse Club, Sesame Street 3D Movie, Bad Boys 2, and the Tom Hanks mini-series From the Earth to the Moon  (which earned Baker an Emmy nomination).

But after 20 years in film production, the industry was changing, so Baker took an entry level model-building job with Universal Studios’ creative department.

The Wizarding World of Harry Potter 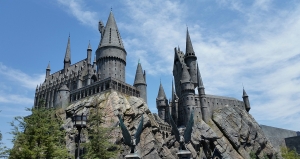 They asked him to build a castle—which turned out to be Hogwarts. For the next two years, Baker built concept models for Universal’s Harry Potter theme parks in Orlando, California, and Japan.

The worlds are fully immersive, from taking the Hogwarts Express train from Platform 9 ¾ to drinking a cold butterbeer on the giant benches of the Leaky Cauldron. The worlds are layer upon layer, from haunted portraits to fountains that come alive with a souvenir wand.

The work Baker did for Diagon Alley in Orlando (which has 106,000 props) was such a game changer that the Themed Entertainment Association created a new award for it: the Paragon award, which won’t be awarded again until someone tops the Wizarding World of Harry Potter.

And Baker is up to the challenge. 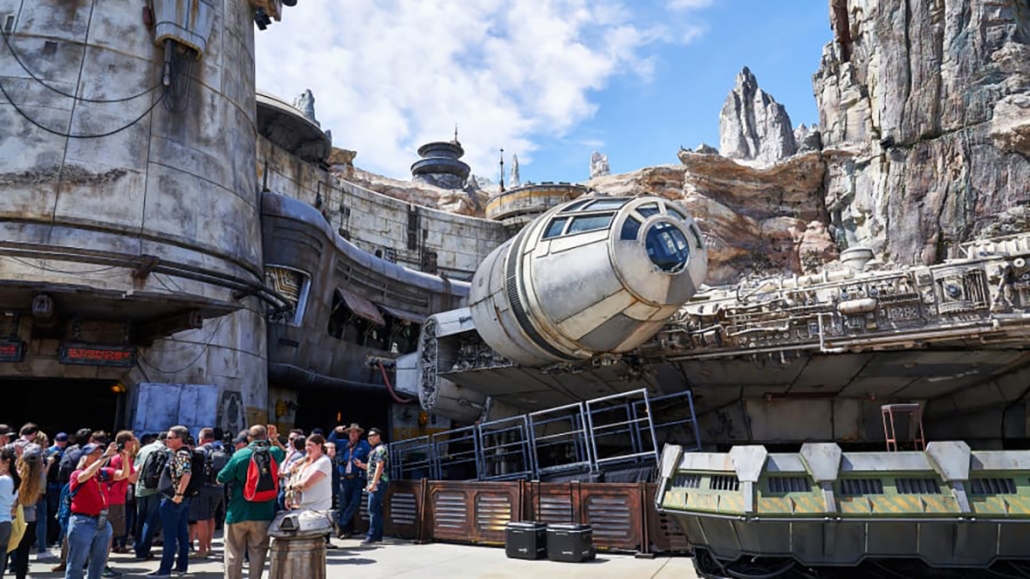 Galaxy’s Edge opened in Disneyland on May 30, and Disney World’s version will open August 29.

Disney took notice of Baker’s work and offered him the job he’d dreamed of since he was a young Padawan: Star Wars. Now he’s overseeing construction of thousands of pieces of props and set dressing for the immersive Star Wars: Galaxy’s Edge, which means a lot of flying between Florida and California (commercial, not on an X-wing).

He’s visited the Star Wars film sets and Skywalker Ranch where he photographed some of the original props from the film, which was another dream come true for him. “Star Wars changed my life,” he says.

But ultimately, his job comes down to using the Force for good.

“I love going to work in the morning to see the look on kids’ faces the first time they come into the park. That’s the most rewarding thing I do: making people happy.”