Athens might not be universally known as the “City of Love,” but the Bulldog Nation might have something to say about that. More than 25,000 couples have met and fallen in love at the University of Georgia. And in honor of Valentine’s Day, we’re sharing just one of many love stories that began in our beloved college town.

Coincidentally, Teman Worku (ABJ ’16) and Kevin Steele (AB ’17, AB ’17) both studied in Morocco while students at UGA. But Marrakech can’t lay claim to “Chapter One” of this recently engaged couple’s story. Instead, as Teman tells it, she and Kevin have one thing to thank for their near-at-hand nuptials: an overly air-conditioned UGA bus.

Once Upon a Time … 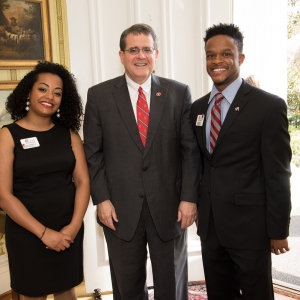 On a freezing bus from Athens to Atlanta, Teman and Kevin were headed to the UGA Alumni Association’s 40 Under 40 Awards Luncheon. Both were members of the UGA Student Alumni Council, a group of committed student leaders that organizes events and volunteer opportunities that current students with alumni.

For reasons she’ll “never understand,” the bus’s air conditioner was on full-blast despite the early morning chill. Teman and Kevin shared a blanket to keep warm. They had become friends through their involvement with SAC and the Student Government Association. On this bus ride, their conversation went beyond the passion they shared for these organizations. A deeper connection blossomed.

For Kevin, this opportunity was long in the making. As a first-year student, he was impressed with Teman when she attended an SGA Freshman Board meeting to talk about her semester studying in Morocco. Back then, he doubted that Teman, a third-year Grady College student, would take notice of a freshman like him. Nonetheless, he was soon headed to Morocco on a Maymester program, so he suggested they grab coffee. Unfortunately, before they could nail down a date, Kevin was boarding a plane to Marrakech and their meeting never happened.

Fast forward one year, Teman and Kevin had become an official couple. As college sweethearts do, they planned date nights on a student’s budget. On Wednesdays, it was Amici for 50-cent wings. In the summers, it was Fuzzy’s tacos or a slice at Automatic Pizza after a Saturday spent poolside.

In 2016, Kevin, an international affairs and Arabic double major, spent a semester in Jordan on a Boren Scholarship. Teman met him for a week-long vacation in Bulgaria where their money stretched further. There, they “ate like kings and queens,” said Teman. “We had appetizers, a full meal, and dessert, too!”

One of the most memorable meals during the couple’s first overseas trip together was at a Moroccan restaurant. The dinner brought them full circle to the shared experience and love for travel that initially brought the two together.

From Chapel Bell to Wedding Bells

Today, Teman and Kevin happily live in Arlington, Virginia. Kevin works in national security for the U.S. government. Teman is a video producer for 2U, a company expanding access to higher education through online learning. This past November, they got engaged. 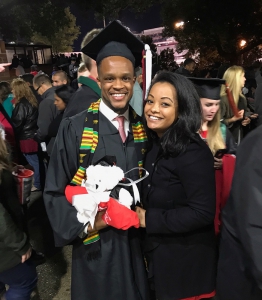 Kevin and Teman celebrate Kevin’s graduation from UGA in 2017.

It was the Tuesday before Thanksgiving, and Teman was traveling home to Atlanta, where Kevin would join her the next day. As she headed to the Glenn Hotel’s chic rooftop, she was under the impression that she was meeting some close friends and a close friend’s mother. Instead, as the elevator doors opened to a noticeably quiet terrace, Teman found Kevin, calm as can be.

The last time Teman and Kevin stood on this Atlanta rooftop, they joyfully talked about the future on a casual night out. Now, Kevin kneeled before Teman, asking her to put those plans into action. Knowing how much Teman loves a sunset, Kevin timed the proposal to the sky turning pink and orange.

“All of these places that we’ve traveled to—Bulgaria, California, Miami—I’ve always made sure to find a spot where we can enjoy the sunset together,” said Teman. “And Kevin kept that in mind when he planned this amazing proposal. He put a lot of thought into it.”

Afterward, the couple headed to a restaurant where Teman was in for another surprise: their families and friends gathered to celebrate their engagement. Now, Teman and Kevin are beginning to plan an even bigger celebration. With lots of relatives on both sides, they anticipate a well-attended wedding. And though they’ve formed a close network of friends in D.C.—many of whom are also Bulldogs—they’ll recite their vows at home, in the state of Georgia. 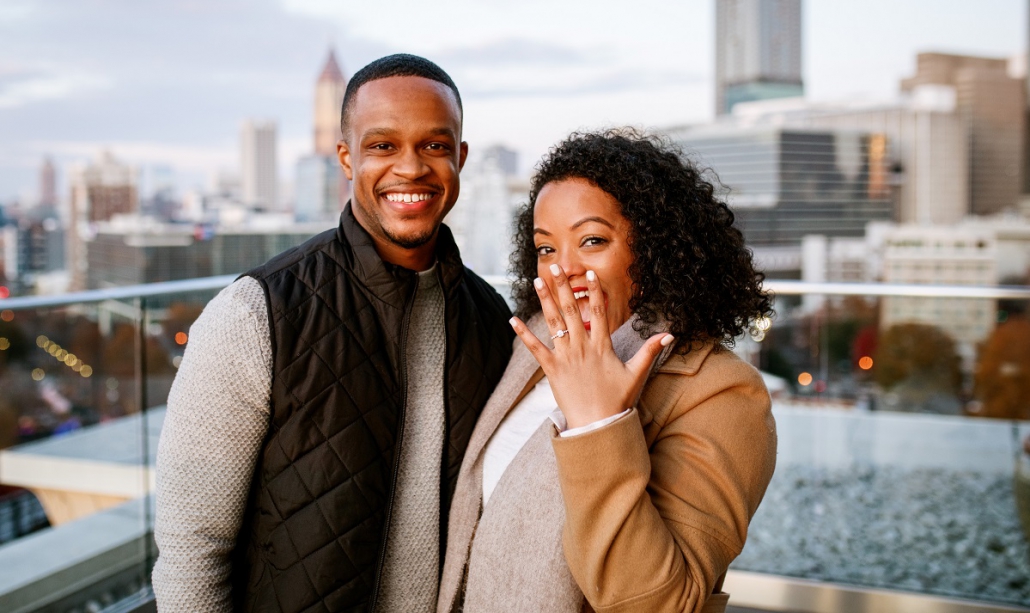