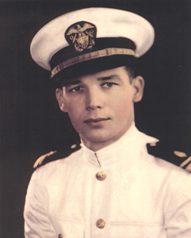 75 years ago today, over 160,000 Allied troops landed on the beaches of Normandy, France, to fight Nazi Germany. Known as “D-Day”, thousands of soldiers were killed and wounded, but Allied victory allowed for the beginning of the end of Hitler’s regime.

The UGA Alumni Association would like to share the story of Dr. Joseph Parker Jr. (BS ’38), an alumnus originally from Waycross, Georgia, who served as a United States Naval physician and was a part of the invasion of Omaha Beach on D-Day.

Parker was a member of the 6th Naval Beach Battalion. After the invasion, he treated wounded Allied and German troops for 21 days on the beach. In 2011, alongside 16 fellow World War II veterans, Parker was presented with the Legion of Honor medal from the French government.

When Parker passed away in Greensboro, Georgia, on September 27, 2012, at the age of 95, he was the longest surviving Navy physician who served at Omaha Beach. 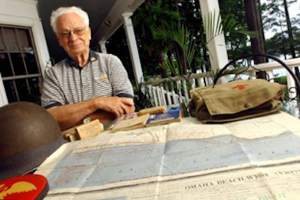 Dr. Parker in 2004. Shot by Allen Sullivan of the Athens Banner-Herald.

A Bureau of Medicine and Surgery interview from 1999 with Dr. Parker is available.

On this anniversary of an important day in our history, the Bulldog family would like to thank those who have served in the United States military, living or deceased.

We appreciate your service and we will never forget the sacrifices you made.