Danielle Derkink (MBA ’05) is an enthusiast, whether she’s talking about her extensive experience in hospitality, being an advocate for women and diversity in the workplace, or creating awareness about childhood arthritis.

The daughter of Dutch immigrants, Derkink fell in love with hospitality at a young age through a family friend who was a live-in general manager at a hotel in Houston. She remembers learning about a new area of hospitality each time she visited her friends. She was curious and intrigued by the way a hotel functioned. Forgoing her initial childhood dream of being a female fighter pilot, Derkink embraced the excitement of a hotel management career instead and followed her passion to the Netherlands, where she received her Bachelors of Hospitality Administration at The Hotelschool The Hague.

Moving back to the United States to begin her career in hospitality, Derkink quickly began moving up the ranks as her career aspirations continued to grow. It was at this time she decided to pursue her Masters of Business Administration at the University of Georgia’s Terry College of Business. Upon completing her degree, she took a promotion to Washington, D.C. and served as a hospitality ambassador for the Terry MBA program in the city.

After a career opportunity in Tampa, FL and the birth of her first child, Elle, Danielle made the move to back to Atlanta and to IHG, a company that has allowed her to live out her other passions – philanthropy and advocacy for women and inclusivity in the workplace.  When Elle was 2 years old, she was diagnosed with juvenile rheumatoid arthritis. In search of a support network, Derkink began volunteering with the Arthritis Foundation’s Georgia Chapter, of which she is now acting co-chair of the juvenile arthritis committee. Derkink has partnered with other organizations including the University of Georgia’s Alpha Omicron Pi to raise awareness about the disorder. Each year the Juvenile Arthritis Foundation and the sorority team up to put on the annual 5K “Run for the Roses” as a fundraiser. 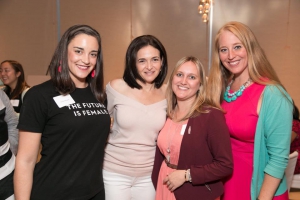 Danielle (far right) at a Lean In event with Sheryl Sandberg (second from left) and other Atlanta-based Lean In leaders, Emily Schwarz and Alison Eminger.

IHG has provided Derkink a platform to demonstrate her commitment to women and inclusion in the workplace. For the fifth straight year, IHG has received a perfect score by the Human Rights Campaign Foundation’s Corporate Equality Index (CEI). At IHG headquarters, Derkink has led the Women’s Lean In Group, inspired by Sheryl Sandberg’s book. Derkink also actively attends IHG’s representation at the Atlanta Pride Parade annually, bringing her two daughters—and this past year, her mother too—to encourage them to be their authentic self.

In addition to her philanthropy and advocacy, Derkink has engaged with the UGA College of Agricultural and Environmental Sciences’ newest major Hospitality and Food Industry Management. IHG will sit on the board of the new major, helping to guide curriculum and support students. The University of Georgia is grateful to alumni, like Danielle Derkink, who are making an impact in their workplace and reconnecting with the university.