As hurricane season approaches its peak and storms are forming, we wanted to learn more about what to expect this year, how to prepare and what the future looks like for hurricane forecasting. For these pressing questions, we turned to Dr. Marshall Shepherd, who is director of the UGA Atmospheric Sciences program, the Georgia Athletic Association Distinguished Professor of Geography and Atmospheric Sciences, a Forbes contributor, the host of Weather Geeks on The Weather Channel, and the former president of the American Meteorological Society. Let’s just say he’s a big deal when it comes to weather and climate. 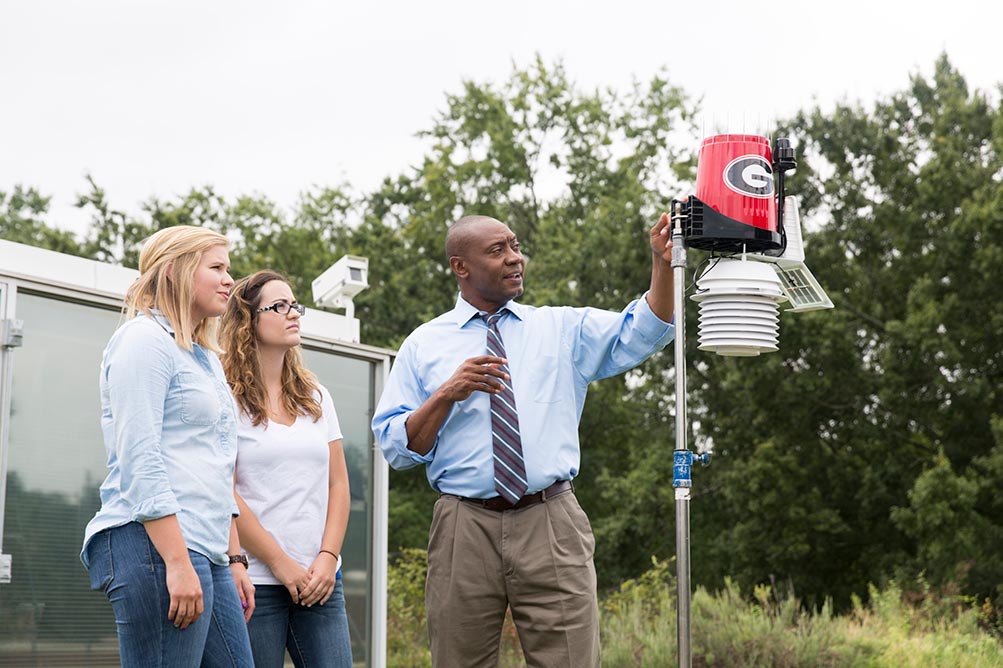 What does a typical hurricane season look like in Georgia?

We have not had an actual land-falling hurricane in over a hundred or so years, and interestingly, it’s because the coast of Georgia sort of aligns in such a way that there’s something in the Atlantic ocean called the Bermuda High, a large high pressure system. Because of the way the air circulates around that high pressure system in the northern hemisphere is a clockwise circulation, it means when those hurricanes are coming out of the tropics, they tend to end up on the left side of that high, and so they’re already starting to curve and head northward, so they don’t really sort of move into the coast.

So I would say for hurricane seasons here in Georgia, although our coast can certainly be impacted by a land-falling storm, it is unlikely because of that curvature. However, as we saw in 2018 with Hurricane Michael and we’ve seen in the past with storms like Tropical Storm Alberto and even with Irma, it is possible. Hurricane season for Georgia is two-faceted: one in the sense that we theoretically can get land-falling hurricanes on our coast but we rarely do because of the curvature, and secondly, we often can get storms that move into our state once they make landfall elsewhere.

Hurricane Michael and Irma are good examples of that, and they also illustrate something that I always try to convey about hurricane impacts, which is that we shouldn’t get too fixated on category all the time, because the impacts associated with a storm like an Irma or a Michael can certainly impact us in Georgia.

Often hurricanes are downgraded to tropical storms by the time they get to Athens. What are the main threats that impact Athens in hurricane season?

With storms that are going to impact us in north and central Georgia, we’re typically going to see lots of rainfall. Even though the storm is weakened from a hurricane, as we saw with Irma or Michael, it still can have tropical storm force winds, which, coupled with rainfall, can be a hazard for falling trees, causing power outages. When storms make landfall in the panhandle of Florida, we can experience tornadoes in the outer rain bands as those bands spiral out to land. The worst impacts of a land-falling hurricane tend to be on the right-front quadrant of the storm, and so that’s where the worst storm surge is on the coast, but it’s also where you get the strongest winds and where you’re most likely to have those spin-up tornadoes.

What are some of the precautions Georgians can take to prepare for hurricane season?

Hurricane season for Athens is probably going to be rainfall, wind and loss of power, and so it’s important to prepare the way you would for any storm where you might lose power. Some things to have on hand:

Before a storm arrives, remove items from your deck or outside your home that could become projectiles in 50 or 60 mile-per-hour winds. I recommend keeping an eye out for large trees around the home, because when you have a lot of rain and wind, those things can fall.

When does hurricane season begin for Georgia?

Typically, August tends to be like the first hill on a roller coaster. We can certainly get a very active season once we get into September and October. In August, the formation point for hurricanes tends to shift more to the western Caribbean, but by September we’re getting to what we call the Cape Verde hurricane season. We start getting waves coming off of the African coastline and some of them, if the conditions are favorable, can develop. [As of late August], the busiest part of the season still looms ahead of us.

What factors influence how active each hurricane season is in Georgia?

Various things. For example, if we’re in an El Nino, which we were for much of the past year, that can tend to lessen hurricane activity in the Atlantic Ocean and the Atlantic Basin because it brings the jet stream too far south and hurricanes don’t like a lot of wind shear. During La Nina, it tends to be the opposite because the jet stream stays to the north. So those are the background factors. We always start by looking to see if we’re in a La Nina, El Nino or a neutral year. I think we’re trending from a weak El Nino to somewhat of a neutral situation, which is perhaps why some experts have upped their estimations for this year’s activity.

Another factor for the Atlantic hurricane season that’s actually quite impactful right now is that there’s a lot of Saharan dust coming off Africa, and that dust actually can inhibit the formation of these waves. If you look at satellite images, there’s quite a bit of dust over the Atlantic ocean. Other than that, you just need warm water and not a lot of wind shear in the atmosphere, so if you can get all of those conditions and you can get these things to develop, then you can certainly get more active hurricanes.

Now what determines where they go is dependent on the center of that high pressure system that I mentioned. If that thing is further out towards Europe, then as they start curving around, they’re going to curve out to sea. If that high is closer to the United States, then it’s more likely that they’ll curve and affect Florida and the Gulf of Mexico. So we’re always looking for the location of that semi-permanent high pressure system.

What kinds of research is UGA doing regarding hurricanes?

There’s research being conducted in various places across campus, including our Atmospheric Sciences program. My research group’s work is funded by NASA and is focused on the Brown Ocean Effect. It’s this notion that sometimes hurricanes, when they make landfall, don’t weaken as we expect, and they can maintain their strength or intensify if the soil is moist or it moves over a swamp or wet land mass. I have a group looking at that with a sophisticated mass of models; it’s really interesting hurricane and tropical cyclone work.

There’s interesting research out of the Skidaway Institute for Oceanography about these robotic drones, and they can plunge deep into the water and measure water temperature, salinity and some other things. That’s huge, because we often hear about hurricanes and the sea surface temperature, but it’s really the depth of the warm water, something we call the ocean heat content, so these drones allow us to learn about the structure of that deep water. One of the things that happens as hurricanes come along and tap into that warm water is they churn up water, and often they churn up cold water, which self-limits development. But if it’s churning up warm water, that’s still sufficient to support hurricanes. We’re pretty good with hurricane track forecasts, but hurricane intensity forecasts lag behind, and part of the reason is we lack the understanding of what’s going on in the deep ocean water, so I think that research by the University of Georgia is game-changing.

Is there anything else Georgians should know about hurricane season?

Thank you to Dr. Shepherd for taking the time to share this information with us, especially as Hurricane Dorian threatens the Southeast in the coming days. Be sure to follow him on Twitter and Facebook.