Fundraising efforts for the University of Georgia continue to exceed expectations, with donors contributing $224 million in new gifts and pledges in fiscal year 2019.

This year’s giving drove the Commit to Georgia Campaign beyond two major goals: raising $1.2 billion and creating 400 Georgia Commitment Scholarships by the campaign’s conclusion on June 30, 2020. It also is the third consecutive year that fundraising has exceeded $200 million.

“I want to offer my thanks and appreciation to each and every donor in the UGA family for helping us achieve these important goals that have advanced the university,” said President Jere W. Morehead. “Because of their incredible generosity, we are now reaching exciting, unprecedented heights across our missions of teaching, research and service.”

One of the most significant benchmarks for continued growth is the five-year rolling fundraising average, which averages the prior five years of giving at the end of each fiscal year. That number has risen every year of the campaign, and in FY19, it reached $204 million. Five years ago, that average was just under $115 million. 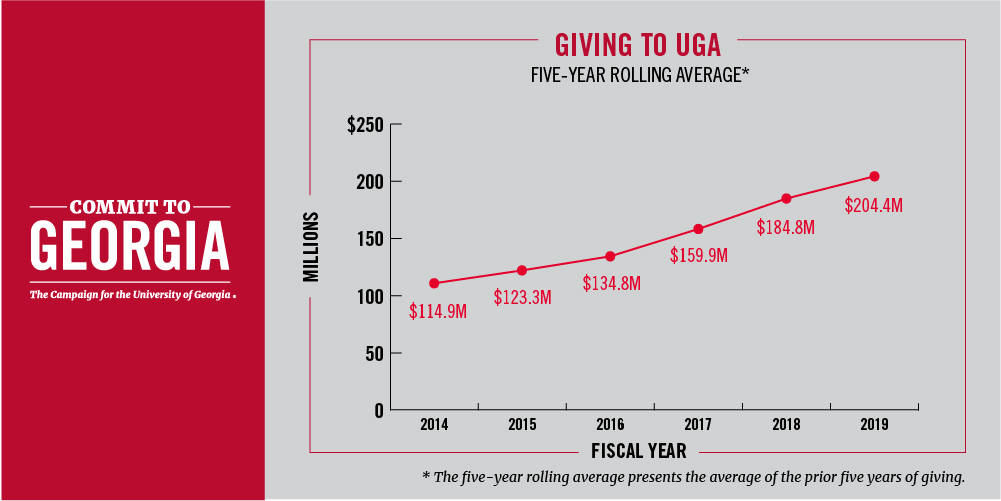 “Year after year, the alumni and friends of the University of Georgia prove how exceptional they are,” said Kelly Kerner, vice president for development and alumni relations. “With their support, we reached our campaign goal 16 months ahead of schedule. The contributions that got us to that point are already helping students, creating new educational opportunities and enhancing research and scholarship.”

Because of private giving, UGA has made considerable progress in the Commit to Georgia Campaign’s three priorities: increasing scholarship support, enhancing the learning environment, and solving grand challenges through research and service.

In 2016, the university announced its intention to create at least 400 Georgia Commitment Scholarships—endowed scholarships for students with unmet financial need—by the end of the campaign. Currently, 451 scholarships have been established, with 191 created in FY19. The more than 300 contributors to the Georgia Commitment Scholarship program have given nearly $30 million in total, which has been matched dollar-for-dollar by the UGA Foundation.

In addition, this year saw the completion of several significant facilities projects funded, in part, by donors, including M. Douglas Ivester Hall and Sanford and Barbara Orkin Hall in the Business Learning Community, the West End Zone project in Sanford Stadium, the Alice H. Richards Children’s Garden at the State Botanical Garden of Georgia, the UGA Entrepreneurship Program’s Studio 225 on West Broad Street, and the Charles Schwab Financial Planning Center.

The giving that has enabled all of these achievements has come from faculty, staff, students, alumni and friends of UGA, both near and far. In some cases, very near: 3,615 dedicated current and former UGA employees gave a total of $9.4 million in FY19. Current and former employee giving has accounted for $53.3 million over the course of the campaign. 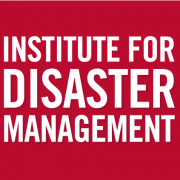 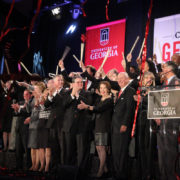 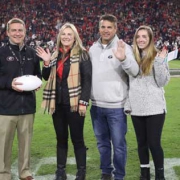 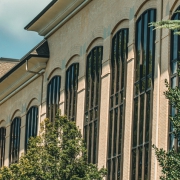 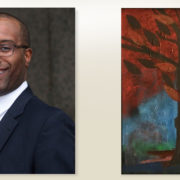 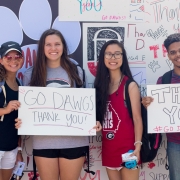 The sweetest surprise on campus: the UGA Creamery
Scroll to top