University of Georgia alumni, friends and students assembled in London on Thursday, April 4, to celebrate UGA, honor the UGA at Oxford program’s 30th anniversary and cap off a tour of London that welcomed the newest UGA at Oxford students to the United Kingdom.

Twenty-two UGA students embarked on a tour of London that Thursday morning. Their stops took them to businesses around the city where alumni employees talked to them about what they do, where they work, the impact of their UGA education and more. These talks covered a wide variety of fields, from Risk Management and Insurance to Neuroscience—participating alumni work for Google; McGriff, Seibels and Williams; BNP Paribas; New York Times; City, University of London; Braincures; and Citibank. 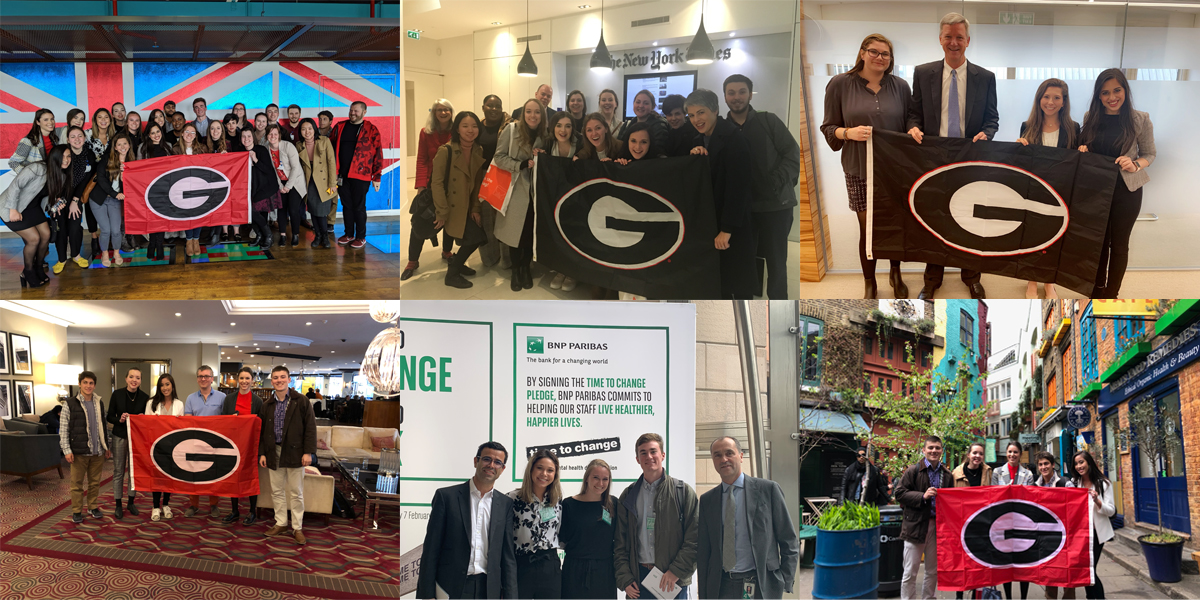 After a day traveling the city, the tour party met with other alumni and friends at The Marylebone, where Kelly Kerner, UGA vice president for development and alumni relations, and Jamie McClung, director of the UGA at Oxford program, spoke to the crowd about what London and the Oxford program mean to UGA.

With the number of Dawgs in attendance that evening, one might have thought The Marylebone had moved to downtown Athens.

Bulldogs can be found the world over – find your local alumni chapter to to socialize, network, and volunteer with Bulldogs in your area.

On Tuesday, April 24, in an almost 300-year-old pub in Mayfair, passersby could find London calling the Dawgs.

The Audley, located in the city’s West End, was the site of a casual gathering of alumni, faculty, staff, students and friends of the University of Georgia. The 50+ attendees enjoyed food, drink and Bulldog fellowship in the historic setting.

Vice President for Development and Alumni Relations Kelly Kerner delivered a few remarks to the room, made up of Bulldog faithful from New York, Georgia, Texas, England and beyond. He brought the news of UGA to London, highlighting research currently being done, the high-achieving incoming freshman class, and UGA’s rankings among US universities.

UGA’s reach extends across the globe, and we’re thrilled to create opportunities for friends near and far to meet and celebrate the university. We wonder what our most famous English Bulldog would have thought if he’d met these other fine English Bulldogs!

Events like these are happening all the time and around the world, thanks to the passionate alumni volunteers who help lead UGA’s 80+ alumni chapters. No matter where you travel, there is often an alumni chapter nearby or a way to connect online—find yours today!

Watch this space for photos from the London event, which will be coming soon!