The history of the Deep South’s Oldest Rivalry is brimming with incredible moments, stunning victories, and crushing losses, and this week you can make the difference against the Tigers. Join the Beat Week challenge at AUvUGA.com, and help the Dawgs win twice this weekend!

It’s 1889 in Baltimore. Two Johns Hopkins University graduate students—one studying history, the other chemistry—go from class to class. The difference in their fields of study makes it unlikely that they will cross paths, which is ironic given that they are from neighboring states in the deep south. In all likelihood, they are unaware of one another, and they certainly don’t know that in three years, they will launch a rivalry that will stretch across three centuries and regularly involve two of the best college football squads in the nation.

In 1889 Baltimore, history student George Petrie of Mongtomery, Alabama, and chemistry student Charles Herty of Milledgeville, Georgia, had no idea they would soon create the Deep South’s Oldest Rivalry.

The birth of the rivalry 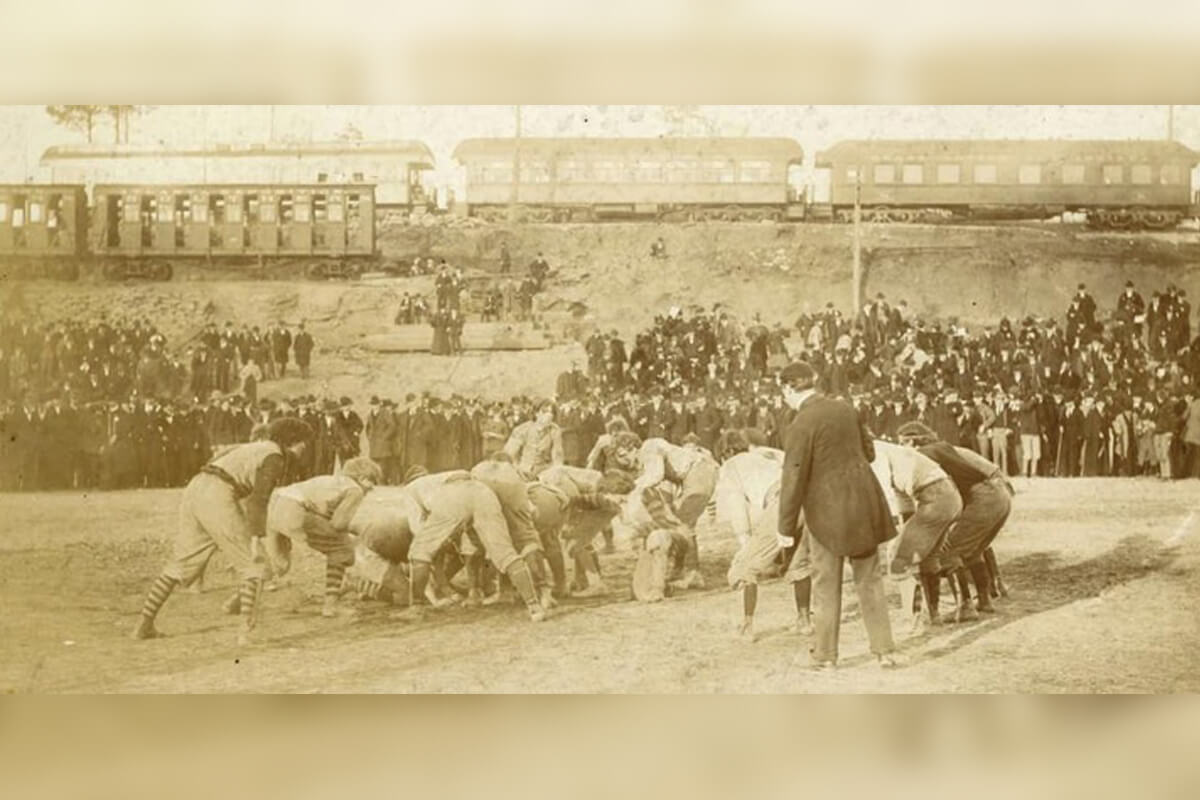 After graduating from Johns Hopkins, both Herty and Petrie returned to their home states in 1891 as university faculty and started building collegiate football squads—Petrie at Auburn, Herty at UGA. In 1892, both Georgia and Auburn fielded their first football teams. Georgia was the first to play a game, thrashing Mercer University’s team 50-0.

At that time, it was difficult to find people in the South who knew the rules of this largely Northern game well enough to officiate it. John Kimball, an Auburn graduate in Athens who followed the fledgling UGA team, asked Petrie, the Auburn coach, to come “umpire” the UGA-Mercer game (Petrie would send one of his players to officiate the game) and Petrie asked Kimball to extend an offer to Herty: to have Georgia and Auburn play in Piedmont Park in Atlanta as part of a three-day weekend celebrating George Washington’s birthday.

Herty accepted, and on Feb. 20, 1892, in front of a crowd of several thousand—each having paid 50 cents a ticket—Auburn played its first-ever football game, Georgia played its second, Auburn won 10-0, and the Deep South’s Oldest Rivalry was born. 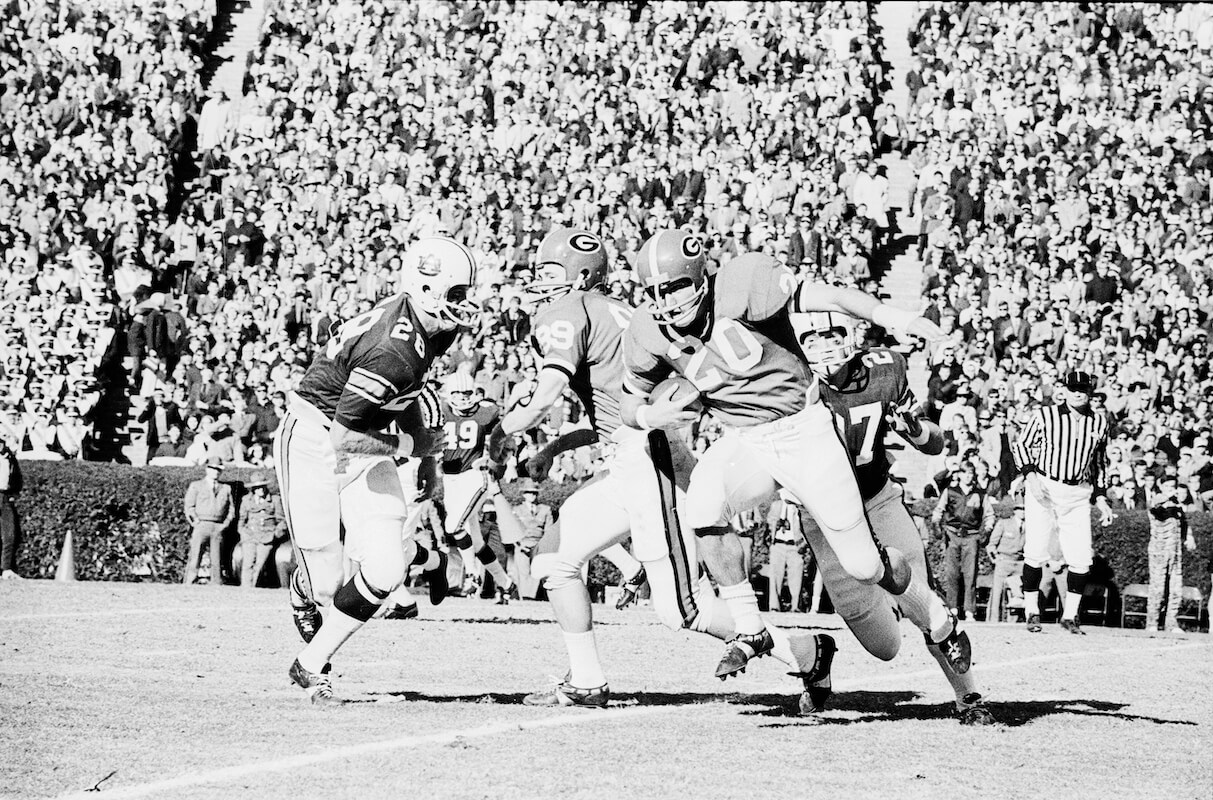 Time was running out for the Bulldogs. Down 13-7 against eighth-ranked Auburn, Wally Butts’ 1959 Bulldogs team could see their last hopes of an SEC championship fading as Auburn drove to run out the clock. But when Auburn QB Bryant Harvard put the ball on the ground, it found its way into the hands of UGA lineman Pat Dye. A few plays later, as time expired, the Bulldogs jumped ahead 14-13. A few games later, Georgia claimed the ’59 SEC Championship and won the Orange Bowl against Missouri. A few decades later, Dye became Auburn’s head coach.

As if that weren’t enough, Shug Jordan, the Auburn coach in the 1959 game—who would go on to become the Jordan in Auburn’s Jordan-Hare Stadium—had previously been an assistant football coach and head basketball coach at UGA.

Oh, and one of Jordan’s graduate assistants on the sidelines for that 1959 game? Vince Dooley.

A hallmark of this rivalry is the interconnection of the schools. Even beyond Dooley, Dye and Jordan, a great many players and coaches on one side started or ended up on the other side. 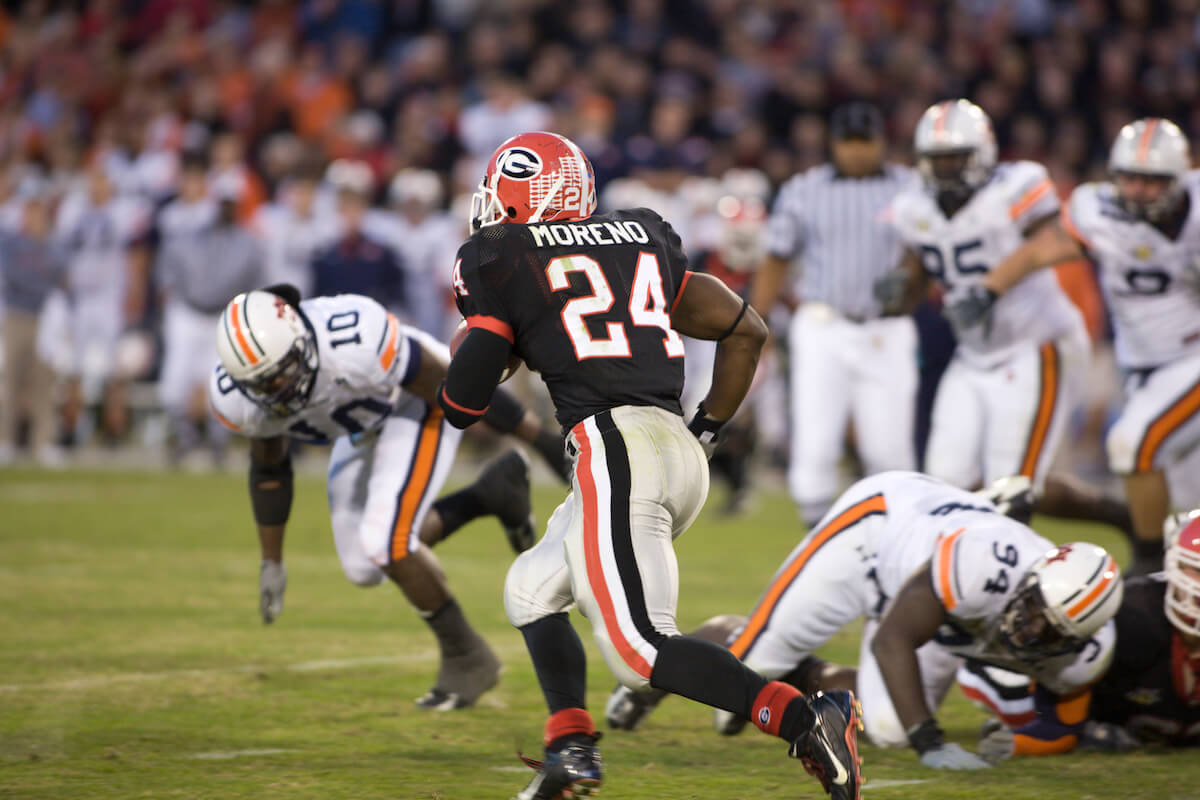 The familiarity and ferocity of these two teams would be enough to create a litany of unforgettable contests, but add to that each school’s football pedigree and their fanbases’ demand for a high caliber football program, and you get unforgettable moments with championship consequences.

It would be nearly impossible to sum up all the memorable moments from the Deep South’s Oldest Rivalry in the space of this blog. If you have some time, it’s worth it to scan the Wikipedia entry for the rivalry, just to see all the incredible moments that define Georgia-Auburn. Here are a few of our favorites.

There’s a certain level of chaos one can always expect in any Auburn game, doubly so in a Georgia-Auburn game. Yes, Georgia won a national championship last year, and yes, Auburn’s coach Bryan Harsin was almost ousted after one year. But it’s the Deep South’s Oldest Rivalry, so as usual, it’s anybody’s game.