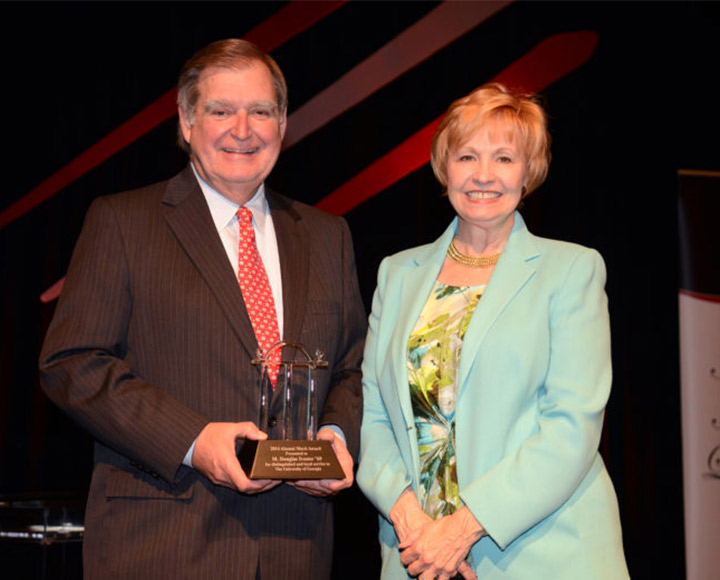 This was written by Ed Morales and originally posted on November 29, 2018, on UGA Today.

The final building to become part of the Business Learning Community at the University of Georgia will be named for M. Douglas “Doug” Ivester of Atlanta.

“Doug Ivester’s outstanding generosity leaves a lasting legacy at the University of Georgia,” said President Jere W. Morehead. “His gift reflects a heartfelt commitment to supporting our students, faculty and staff and will strengthen the learning environment for generations of business students.”

“We are so grateful to Doug for his investment in the college’s future, as well as the time he gives every semester to the Deer Run Fellows Program,” said Dean Benjamin C. Ayers. “We are excited for completion of the final phase of construction in the spring. In these facilities, thousands of Terry students will be educated each year, and virtually every undergraduate will take classes in Ivester Hall. Those students will go on to serve as leaders in their businesses and their communities.”

Ivester graduated from UGA in 1969 with a bachelor’s degree in accounting and now presides over Deer Run Investments LLC. He was elected chairman of the board and CEO of The Coca-Cola Co. in 1997, a company he joined in 1979. In 1981 he became the youngest vice president in the company’s history. Two years later he was named senior vice president of finance, and in 1985 he became chief financial officer at the age of 37. He retired from Coca-Cola in 2000. He began his career at Ernst & Ernst, eventually leading its audit team for The Coca-Cola Co.

Each year, Doug and Kay Ivester host Terry College’s Deer Run Fellows at their 25,000-acre property in Leary, Georgia. In the fellowship program, Terry faculty and staff choose eight students to take a leadership class that centers around a unique weekend immersion experience on leadership and life with select industry experts.

“The University of Georgia is so important to our state and our region, and the university elevates everyone who experiences its passion for learning. My time at UGA was foundational for me. Without the experiences I had at UGA, I don’t think I could have ever joined organizations like Ernst & Young or Coca-Cola. UGA provides students with the skills necessary to chase their dreams. I will forever be grateful to the university and can never adequately express my gratitude,” Ivester said.

Ivester is an emeritus trustee of the University of Georgia Foundation. He is on the board of directors at SunTrust Banks, is a trustee of Brenau University and a director of the Melvin Douglas & Victoria Kay Ivester Foundation. He is a former board chairman of the Robert W. Woodruff Health Sciences Center, an emeritus trustee of Emory University and a former board member of the Woodruff Arts Center. He is a former board member of numerous corporations, including The Coca-Cola Co., S1 Corp., Coca-Cola Enterprises, where he was chairman of the board, as well as a number of community organizations.

Earlier this year, the other Phase III building at the Business Learning Community was named for Sanford and Barbara Orkin of Atlanta. UGA broke ground on Phase III in October 2017 after the dedication of Amos Hall, Benson Hall and Moore-Rooker Hall, which comprise Phase II. Terry College faculty and staff moved into the Phase II buildings in fall 2017. Phase I (Correll Hall) opened in 2015 and was funded entirely by private contributions.

Phase II and III are the result of a public-private partnership between the state of Georgia and hundreds of donors. The Business Learning Community represents one of the largest capital projects in the university system’s history.

The following video was shared during the UGA Alumni Association’s 2014 Alumni Awards Luncheon when Ivester was recognized as an Alumni Merit Award winner. The University of Georgia is grateful for the Ivesters’ continued involvement and generosity.

Janet Geddis (MED ’06) grew up surrounded by and entertained by books.  She claims her love of books comes from “being a child of avid readers.” She remembers that if she were bored, she was told to go outside, read or draw. She also remembers her parents reading to her every night. Janet founded Avid Bookshop on Prince Avenue in Athens seven years ago and two years ago opened a second location on Lumpkin Street in Five Points. Avid Bookshop was just named a Bulldog 100 company for the third time, which means it is one of the fastest-growing businesses owned or operated by UGA alumni.

Maybe surprisingly, Janet claims getting her Master of Education in Educational Psychology with a focus on Gifted and Creative Education helped her open Avid Bookshop. “In everything I do I think about my professors and classes,” says Geddis. She says so much of the events and strategy revolves around her understanding of creativity and learning. Even if someone is not artistic, ultimately, creativity is stimulating. Avid Bookshop invests in the community through multiple events, including their Avid in Schools program, she says. The bookshop brings well-known or debut authors or illustrators to schools so students can meet working authors and illustrators. The community clearly loves Avid Bookshop back. Janet fondly recalls that one of her most influential professors, Dr. Bonnie Cramond, helped paint the Prince Avenue shop with other community volunteers before it opened. Visiting Athens? Check out Avid Bookshop’s event page for more information about community events.

The University of Georgia and a passion for quality whiskey brought five alumni together to create one of the most successful young distilleries in the country and win the highly coveted Double Gold medal for a whiskey from the San Francisco World Spirits Competition. This is the first such award for a Georgia whiskey.

Jim Chasteen (BBA ’98) and Charlie Thompson (AB ’99, MBA ’03, JD ’03) met at UGA while pursuing degrees in business and law. Jim and Charlie connected over their passion and interest in whiskey, which eventually spurred a desire to craft their own recipe. They founded ASW Distillery (ASW) in 2011, and eventually hired fellow alumni, Justin Manglitz (BBA ’04) as head distiller, and Chad Ralston as Chief Marketing Officer (BBA ’08), in 2015. Today, five out of six partners (including Kelly Chasteen (BSED, ’00) in ASW hold degrees from UGA.

Since ASW’s inception, it has won multiple awards, including the first Double Gold medal from the San Francisco World Spirits Competition for a one-year-old whiskey. Their award-winning Duality whiskey was also the first to combine malted rye and malted barley in the same batch.

Learn more about ASW in a recent Garden and Gun magazine feature.

Charlie is breaking down barriers outside of the beverage world, too—most recently by establishing a scholarship to support students in UGA’s MBA/JD dual program. Just like their award-winning whiskies, this scholarship is the first of its kind. Most importantly, though, it will support UGA students in perpetuity. 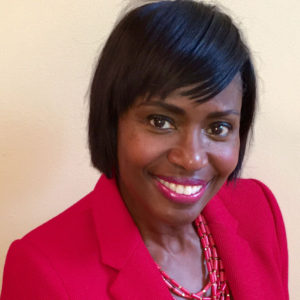 Women of UGA’s mission is to foster a lifelong commitment to the University of Georgia by creating opportunities for personal and professional development, instilling a spirt of giving, and investing in the future of the university, its students and alumnae. We recently got the chance to interview Terri Polk (BBA’86) in order to learn more about her experience at UGA and what drives her to stay involved with her alma mater. Here’s what she had to say!

In what year did you graduate from UGA and what was your major?

As the director of brand development at The Coca-Cola Co., I help to drive brand awareness of our tea and coffee portfolio brands across the U.S. The tea and coffee brands include Gold Peak Tea, FUZE Tea, Honest Tea and Peace Tea.

What is the most important thing that you learned in college?

I ran track at Georgia, so I would say the most important thing I learned was time management. Time management in terms of being able to accomplish my academic and athletic goals, manage friendships, have time to be student (as in being crazy), have fun and be a kid. So, the greatest thing I learned was how to manage my time to accomplish the things I wanted to accomplish. I was also able to add on additional skills in being persistent, relentless and hyper-focused. Those traits help me now.

How did you get involved with the Women of UGA Leadership Council?

You know, it’s so random how things happen. I wasn’t engaged with UGA for a number of years. About five years ago, I ran into Yvette Daniels, the current secretary UGA Alumni Association (AB ’86, JD ’89) and she asked if I was ready to get engaged with Georgia. I asked to think on it a little bit. I thought on it for about a year, and I called her back about it about four years ago. I started just attending events that were sponsored in Atlanta and seeing exactly was the university was up to from an academic perspective. Then, I became involved a little later.

Why is the Women of UGA Leadership Council important to you?

You get to a point in your life when you want to start giving back for what you have received. That point has come for me in terms of being able to serve the university in a way that’s helpful for future students. Doing work to support the scholarship that Women of UGA has endowed is one way to do that for me. Being able to help students with an academic need was really intriguing for me.

What is your favorite UGA memory?

One of my professors gave me absolute support and was actually interested in my success. He would even come to track meets! It meant the world to me to see a professor at our track meets. That was phenomenal and a good memory for me. Another good memory for me was going to all of the sorority and fraternity parties in Memorial Hall back in the day. It was really hot, but fun. It was the only thing going on so if you weren’t at the party in Memorial, what were you doing?

What about the Women of UGA Leadership Council excites you the most?

The fact that the council includes women with diverse backgrounds and interesting things that they do. From their experiences at Georgia to what they do professionally now, that is quite motivating. From a separate perspective, being able to look around the room and see the success that these women bring to the table. Overall, it’s the ability and excitement to create programs that bring alumni together and bring opportunities to raise funds for the Women of UGA Scholarship Fund. That really excites me.

What’s the biggest change you’ve seen at UGA since you were in school?

The way the campus has expanded, the majors being offered and the competitiveness of getting into the school. I also like the emphasis on global education and experiences. Seeing the opportunities to study abroad makes me happy. When I was going to school, the thought of going abroad was out of reach to even think about. Now to see it as generally part of the curriculum to go out of the country and get a global perspective is awesome and one of the best changes I’ve seen.

Where was your favorite place to eat when you were a UGA student?