This year’s UGA College of Pharmacy “40 Under 40” alumni recipient defied the popular opinion of his fellow classmates in 2005.  At the college’s senior banquet that year, Kasey Knight was awarded the dubious senior superlative honor of “Classmate Least Likely to Ever Practice Pharmacy.” However, Knight’s vision, tenacity and passion for his chosen profession certainly has shown the naysayers that they were wrong.

Now the owner of Lee & Pickels Drugs, the leading independent drug store in Quitman, Knight’s aspiration for the pharmacy field surfaced at a young age. His mother says that her son created a career project in the third grade that displayed his desire to be a pharmacist.  Briefly, he considered life as a physician and a football coach.  But in the end, he returned to his original plan. 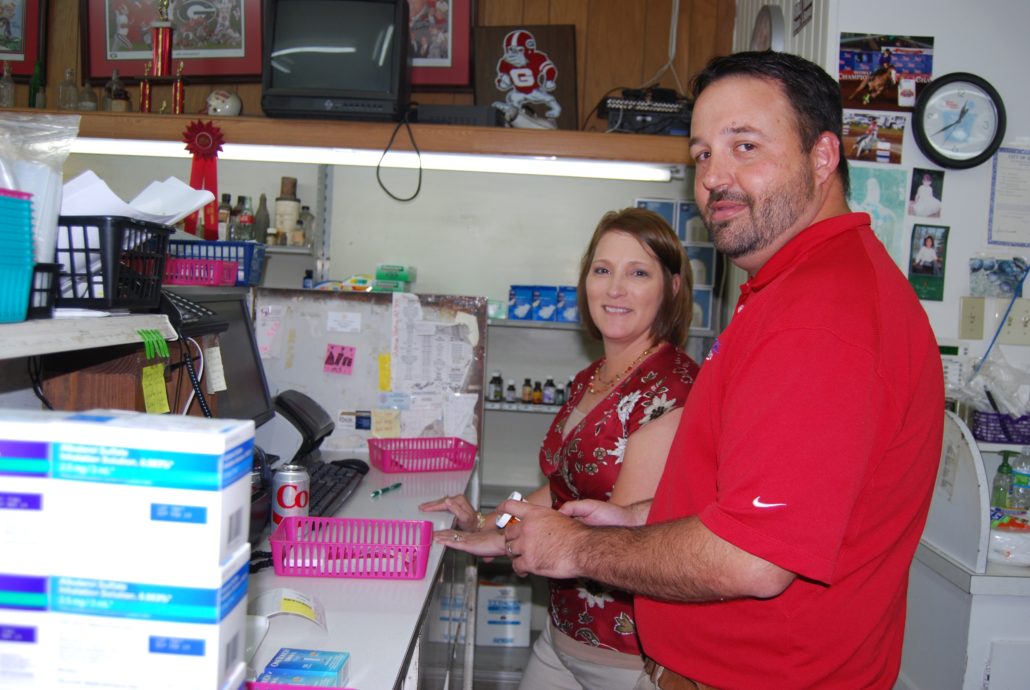 Kasey Knight consults Anne Smith, who has been a pharmacist at Lee & Pickels for two years and is a UGA College of Pharmacy alumna.

After receiving pre-pharmacy requisites from Mercer University in Macon, Knight came to the place he calls “heaven” – Athens.  “I’ve been a bulldog fan all my life,” said Knight. “When I was young, my grandparents had season football tickets, and I attended every game I could.  So, the opportunity to come to school at the University of Georgia was thrilling.”  While Knight admits he wasn’t very involved in college activities during his time in school, he had no doubt he would pursue his career.  Following graduation, Knight began working at the Kroger pharmacy in Waycross.  “But I always wanted to work in an independent pharmacy,” he said.  “And long-term, I knew I wanted to own my own store.”

To gain experience, Knight joined Bennett’s Hometown Pharmacy in Nahunta, owned by fellow alumni Stetson (PHARM ’96) Bennett and Denise Bennett (PHARMD ’96).  “Stetson taught me the ropes of being a business owner,” said Knight.  “He was very influential in my career, and I am deeply indebted to him.”  Later, he helped Bennett open a second location in Waynesville. He also met his bride, Danielle, who was a pharmacy tech, at Bennett’s. After three years, the opportunity to buy Lee & Pickels Drugs surfaced in 2011, and Knight and Danielle purchased the 76-year-old pharmacy, which literally is the corner drug store on the main street of Quitman.  Currently, he fills an average of 400 prescriptions a day with the help of 15 employees.  He recently expanded his company to include durable medical supplies.

“I love being an independent pharmacist,” said Knight.  “This is the best profession in the world.  I don’t just dispense drugs; I connect with my customers, and I have a relationship with them. I become a part of their lives. I have had many customers say that they are more comfortable talking with me about their medical concerns than their own doctors.  And, as an independent pharmacist, I have the freedom to create the kind of business that I think is best for this community and best for my family.”

Knight is quick to give credit where credit is due.  “The College of Pharmacy allowed me to be the success I am today. I owe everything I have as a pharmacist to the outstanding education I received while I was in Athens.  Without the college, I wouldn’t have realized my passion and my success.  I am eternally grateful for the experience I had at UGA.” 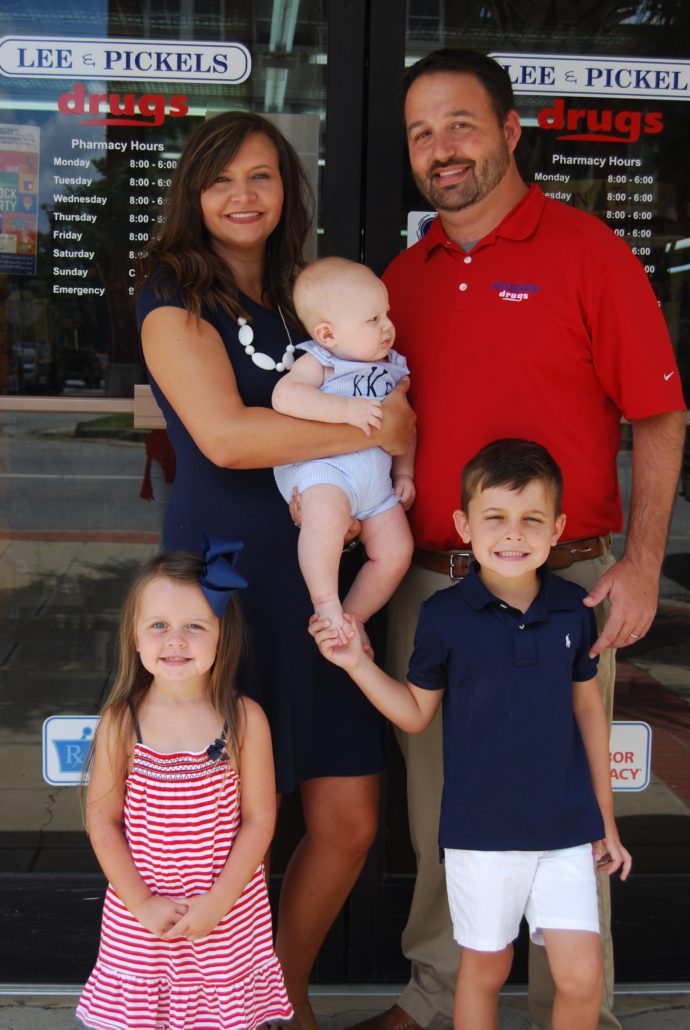 Kasey Knight and his family stand outside their drug store in Quitman. (front, l-r) Hannah and John Thomas. (back, l-r) Danielle, Kaleb and Kasey.

Knight also understands that his role as entrepreneur means he has to be engaged with the town that is now home to him, Danielle and their three children: John Thomas, 5; Hannah, 4; and Kaleb, 6 months. He was elected to the local Brooks County Board of Education in 2014. In addition, he is on the board of the Boy’s and Girl’s Club, the Kiwanis Club and the Brooks-Quitman Chamber of Commerce, and he serves as a deacon at the First Baptist Church.

A quick stroll through town with Knight allows anyone to see how beloved and popular this hometown pharmacist is. Every passerby extended a warm hello or short anecdote to the UGA alumnus as he walked passed them.  “I love what I do and the customers I serve,” said Knight.  “It means the world to me to be a pharmacist.”

This story was written by Mickey Montevideo, UGA College of Pharmacy.