Two decades and different landscape architecture firms can’t keep Bob Hughes (BLA ’77) and Bill Caldwell (BLA ’97) from making a permanent impact on not only Atlanta’s parks, but also the regional economy, together. 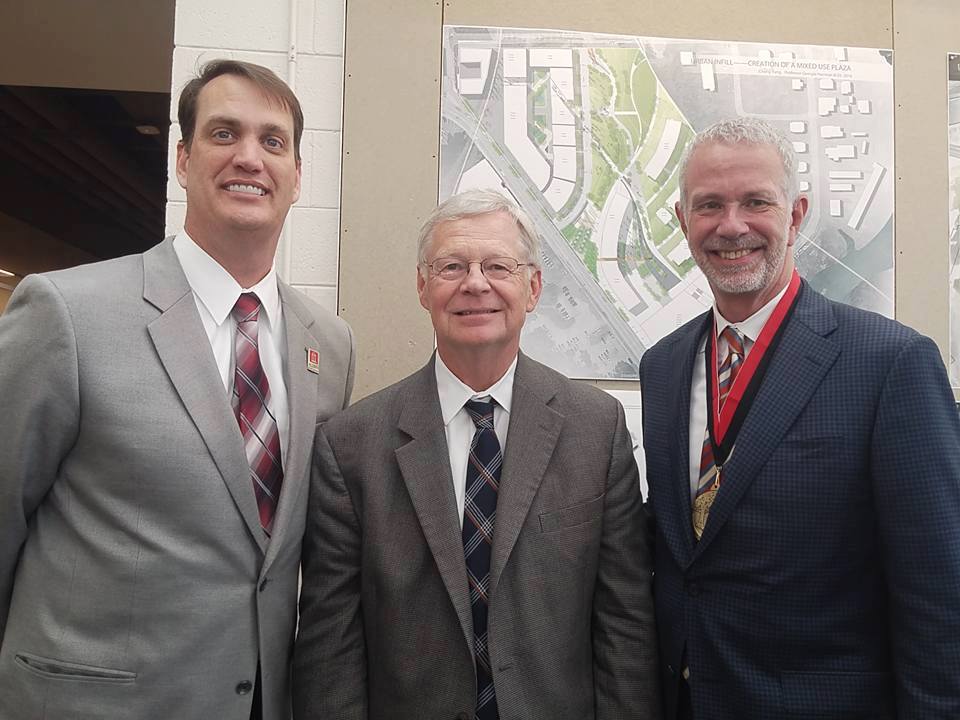 Bill Caldwell, Dean Nadenicek of the College of Environment and Design and Bob Hughes

HGOR Principal Bob Hughes and Harrison Design Director Bill Caldwell graduated 20 years apart, and now work together to achieve the same goal in Atlanta, to elevate the economic and social impact of the many parks that help give Atlanta the nickname, “the city in a forest.” Thanks to their joint efforts, Buckhead now boasts Charlie Loudermilk Park, a plot of green space in the heart of the city.

Though their professional endeavors don’t cross often, their commitment to the community creates a tie between them. Bill serves on the board of Chastain Park Conservancy, while Bob serves on the board of Piedmont Park Conversancy. Bill, with the Chastain Park Conservancy, recently opened Play Chastain, a world-class playground, and is undertaking the Powers Ferry path widening. Bill also serves as a member of the UGA Alumni Association Board of Directors. One of Bob’s many projects includes creating a new master plan for Memorial Park that proposes a transformational overhaul of the use and functionality of the park.

To these two urbanists, parks are about getting people out of their cars and into public spaces while creating a tremendous social, economic and environmental benefit to the community, residents and environment.

“These two men are visionary thinkers who look toward the future. They are committed to improving social spaces and adding green spaces to Atlanta,” said Park Pride Executive Director Michael Halicki. “Places where people want to take their children and where people want to live.”

Bill and Bob encourage their respective teams and all UGA alumni to leave the office confines to make a difference in their neighborhoods.

“Unless you put yourself out there, you don’t experience the great opportunities, potential and people that exist in your community. The best opportunities aren’t in your office,” remark Bob and Bill.