On July 27, news of comic artist and longtime Bulldog fan Jack Davis’ passing spread among the Bulldog Nation. Known for his distinctive style and love of celebrating the Georgia Bulldogs, Davis’ artwork graces the walls and offices of many Bulldogs. One of the founding editors of Mad Magazine, Davis’ influence extended far beyond Athens, Georgia.

When asked about Davis’ legacy and involvement with the UGA Alumni Association, former executive director Dave Muia (AB ’74, MED ’79) said, “Jack was a true gentleman and loyal alumnus. He was always pleased to serve the university and share his talent. While he is immortalized by his famous Bulldog caricatures that he did annually for the Georgia Bulldog Club, he also did a variety of special projects for the Georgia Fund and the UGA Alumni Association. Each and every time his illustrations were used, whether on the cover of the Georgia Magazine or given as a commemorative print, alumni and friends were filled with pride.” 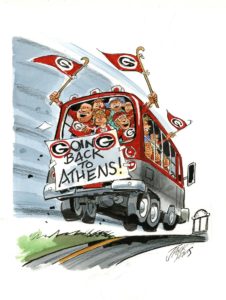 A Jack Davis original from the Hargrett Library collection

Born Dec. 2, 1924, in Atlanta and raised in Georgia, Davis studied with artist Lamar Dodd at the University of Georgia, which he attended on the G.I. Bill. Davis honed his skills at UGA drawing for The Red & Black, the student newspaper, and Bullsheet, an Athens humor publication. He later moved to New York, where he attended the Art Students League before working with William Gaines’ EC Comics. He later supplied covers for Time and TV Guide, created album cover art and designed movie posters. 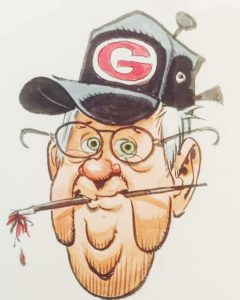 He endeared himself to Georgia Bulldog fans over decades with his famous caricatures of a bulldog usually pummeling opposing team mascots and/or celebrating after UGA victories.

His long relationship with the UGA athletics program began in 1948 when he drew head football coach Wally Butts for the front and back of that year’s media guide.

“Aside from his kind and giving personality, how Jack Davis painted UGA came to be how we all saw the Red and Black. Colorful. Loud. Intense, but not without a healthy dose of self-awareness and fun. From the private chambers of the Georgia Supreme Court to South Georgia Barber shops, his work is displayed across the “Bulldog Nation” as a reminder of the best parts of what it means to be a part of the University of Georgia.

In my book, Jack Davis is UGA. What Munson did for our ears, Davis did for our eyes. As Jeff Dantzler said, we were so lucky to have him.

May we all aspire to live a life like Jack Davis – taking the time to use our talents and abilities to remind others about the best in themselves.”

In memory of Jack Davis’ life, please consider making a gift to the Lamar Dodd School of Art’s Jack Davis Scholarship. This scholarship will provide support for an undergraduate student(s) majoring in art who has a passion for illustration, and the demonstrated talent and dedication to succeed as an illustrator.

Athens Named One of the Most Affordable Cities in America