Rob (BSA ’96) and Eric Cohen (BSA ’00), two University of Georgia graduates, have uncovered one of Georgia’s best kept secrets – the pecan. The roots of the pecan in Georgia originates from Savannah, Georgia. The tree nut has been a staple item for Georgia landowners since the late 1800’s, which has led to the state becoming one of the country’s top pecan producers.

The brothers developed farming skills at an early age while working on their family’s farm in Brinson, Georgia. They learned the tricks of the trade from their father, who farmed pecans part-time. Throughout college, both brothers used the knowledge that they gained from their agriculture courses to assist on their family’s pecan orchard. Ultimately, Rob received his degree in plant protection and pest management, while Eric pursued agriculture economics.

The Cohen brothers would have never imagined that they would be running a successful business when they purchased their first pecan orchid back in 2000. Their farm, Pecan Ridge Plantation, spans across five counties, encompassing land in Thomasville all the way to Lake Seminole. Along with selling to international markets, both brothers began to expand their pecan knowledge by working on their own projects within the industry. Rob offers pecan consulting services, while Eric runs Truffles by Tate, a pecan truffle business. 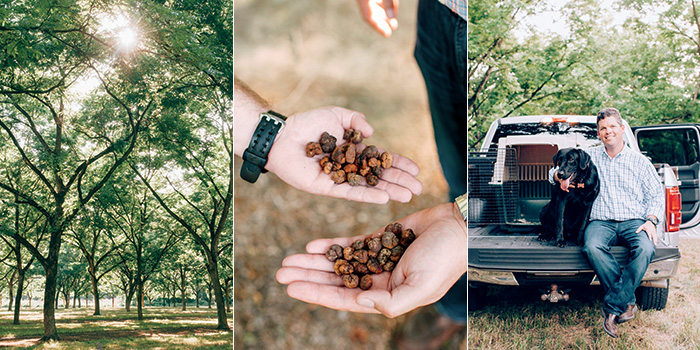 Eric’s business is unique, in that his trained dog, Tate, finds concealed pecan truffles. After Eric realized that pecan truffles were difficult to find, but were a hot commodity, he turned to Dr. Tim Brenneman for assistance. Dr. Brenneman, a University of Georgia plant pathology professor, served as a mentor, and helped Eric find markets for his product. Now, Eric sells his product to both local and non-local high end restaurants, as well as food enthusiasts, who are looking to experiment with the truffles.

The limits for their pecans are endless. In 2014 the Cohen brothers started their own pecan oil business, and in 2016 became the first business to sell pecan truffle oil on the market. Recently, Eric was named to the UGA Alumni Association’s 40 Under 40 Class of 2016.

Read more about these Bulldog brothers in Garden and Gun.