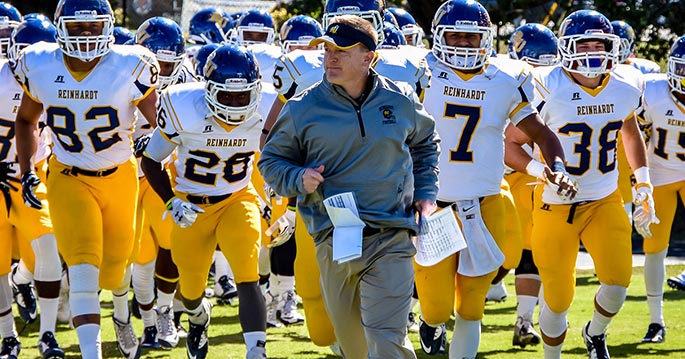 Drew Cronic (BSED ’97) was recently honored as the American Football Coaches Association’s NAIA Region 1 Coach of the Year. Cronic has been a member of Reinhardt University’s football program since 2012, and was named head coach in 2015. In the span of a few months, he has led Reinhardt into its best season record yet, with nine wins and just two losses.

For Cronic, this passion for athletic achievement is nothing new. While at UGA, he was a member of the football team where he earned varsity letters and Southeastern Conference All-Academic honors in 1996 and 1997. After graduation, Drew continued to pursue his passion as a graduate assistant coach at the University of West Georgia, and continued to develop at other programs, such as Furman, James Madison, and Central High School in Carrolton, Georgia.

Reinhardt Director of Athletics Bill Popp said, “I’m so proud of the accomplishments of our football program, and this is one of those ‘icing on the cake’ moments for Coach Cronic. I could not be more proud of him and the young men on that team for the job they did this year. This is a very well-deserved honor for Drew Cronic.”

On the other hand, Cronic believes that the team won this award, and is looking forward to the future of coaching this young football program.

“Head coaches win awards because assistant coaches and players do an amazing job,” Cronic said. “Really, I consider this a team award. This was the year we were really able to put Reinhardt on the map and start turning some heads around the country.”

End of the Year Reflection
Scroll to top